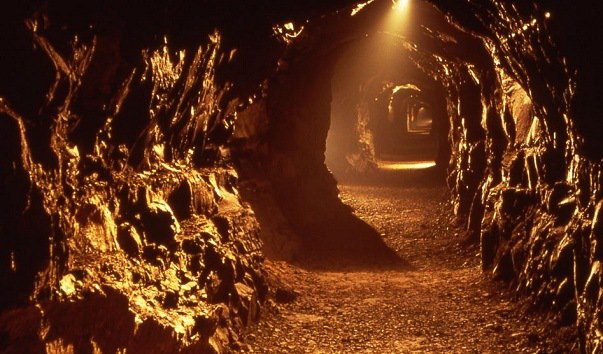 Actun Tunichil Muknal (ATM) is a cave in Belize near San Ignacio-Cayo, which has skeletons, pottery and tools from the Mayan civilization. The name of the cave translates as “Cave of the Crystal Sepulchre”. The locals refer to it as Xibalba, after the Mayan underworld. This cave was believed to be an entrance to hell and the domain of Mayan death gods, the Lords of Xibalba.

The cave is located in the Tapir Mountain Nature Reserve. To get to the Actun Tunichil Muknal cave, you have to walk up an easy road through the jungle for 45 minutes. The cave entrance is flooded, so you have to get wet to get inside.

The most popular among the human remains is a skeleton of a Crystal Maiden -  an eighteen year old girl, who was sacrificed. She has lain there for at least 1,100 years, and her skeleton got completely calcified, giving her bones a sparkling, crystallized look.

The ATM cave consists of a series of rooms, the last of which is the Cathedral, where sacrificial ceremonies were being held. 14 skeletal remains, including the Crystal Maiden lay in the Cathedral along with ancient pieces of Mayan pottery marked with “kill holes” - the Mayan way to mark ceremonial offerings to the gods.  The skeletons belong to adults and children, four of them are infants between 1 and 3 years old, one child of 7 years old, a 15 year old teenager who was bound before she was killed, a 20 year old, and adults between 30 to 45. The younger skeletons have elongated skulls due to Mayan tradition of skull shaping. Most of the people in the cave were killed by a blunt hit in the head, some have their skulls crushed completely.

The skeleton of Crystal Maiden is not only unique because it shines – her circumstances of death are different from the rest of the sacrificed Mayans. Researchers believe that she may have died in a particularly violent manner – her positioning is strange and two of her vertebrae are crushed.

There are also carvings on the cave's walls, depicting silhouettes and animals. And, of course, no entrance to Hell could be complete without spiders – the cave is also a home to Amblypygi whip spiders and other predatory spiders, along with a large population of bats, big crabs and fish.

Actun Tunichil Muknal cave has been open to the public since 1998, however, the number of visitors permitted to go inside is strictly regulated by the Tourism Authority of Belize.

Read more about Belize off the beaten path