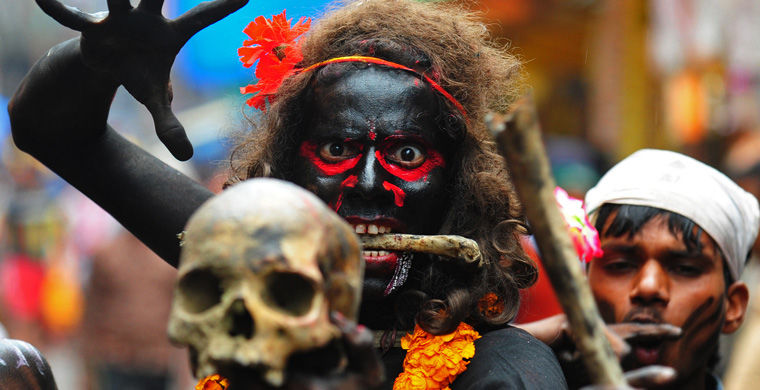 They have black tongues, chains around genitals, they eat remains of the dead and meditate in haunted houses – they are Aghori, the ascetic Shaiva sect sadhus of India.

The life of every Hinduist is the result of his karma. Whatever you did in the past life, will be reflected by the caste you belong to in your present life.  If you were born a Brahmin in the family of priests, or a poor servane -  it's the result of karma. One is supposed to follow the rules of his caste in order to be reborn as a higher caste.

Besides the rules of the caste, there are four goals of life, ordered as follows: kama – sensual pleasures, artha – material prosperity, dharma – morality and righteousness, and moksha – liberation from the cycle of life and death. It is impossible to proceed to the accomplishment of the next goal without attaining the previous one – they have to be in order.  That is why moksha is usually practiced by older people. However, there are exceptions. Some are said to be born with a spiritual level so high that they no longer need to achieve kama, artha and dharma – the only goal left is moksha. Those people are called sannyasins, sadhus, hermits or wanderers, saints or criminals.

The weirdest sadhus are, of course, Aghori. They eat filth and use ashes from the dead to paint their bodies, perform rituals around corpses of humans and animals and live close to the funeral pyres to be able to access burnt human remains with greater ease. Their robes are black and they wear necklaces made out of bones. Most of the times they are under influence of opium, charas or alcohol, looking at you with their dozy eyes from under the tangled mop of hair. Under their robe, they have chains, wrapped around their genitals, making them completely defunct.

Some Aghoris have trident staves of Shiva, with a begging bowl made out of a human skull attached to it. Their bodies are covered with scars due to frequent self-mutilation practices, and their tongues are black, because when they try to eat human flesh from the pyre, they can not touch it with their hands, since it could be a body of a woman. The corpse eating ritual symbolizes the transcendence of Aghori's lower self and realization of omnipotent Self of universal conschiousness.

Aghori see the world as a huge crypt, where everyone is already dead. The very fact of birth proves the inevitability of death, and since death is inevitable, it has already taken place. Since death has already occurred, the world is a complete illusion, and all opposites in it are illusory. Aghori see the world as god's creation, where nothing is bad or good – all of it is sacred, nothing is vile or disgusting. By their actions, they try to change their perception of reality, transcending social taboos and trying to realize non-duality, which is not easy to understand for a Westerner.

Aghori worship Shiva, the Hindu god of destruction, and Kali, the goddess of death and a female incarnation of Shiva. Shiva symbolizes the element of fire, which destroys the old to create the new.  Every month Aghori perform a ritual where they sing love songs to Shiva and satisfy Kali by using a dead body. They smoke and drink because Shiva used to smoke opium, sitting on top of  Mount Kaliash and stopping the heavenly movement with his hair.

Other Indians are afraid of Aghori. They believe that Aghoris possess magical powers – Siddhis. By erasing the borders between pure and foul, they know no good or evil, they are unpredictable and do what they want.

If you want to look for Aghori, you will easily find them around cremation grounds across India. Their main pilgrimage center is Kina Ram's ashram in Ravindrapuri, Varanasi.

Read more about India off the beaten path 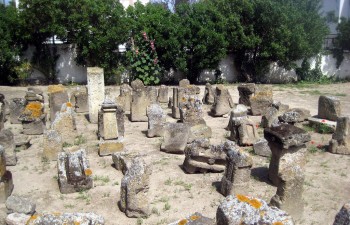