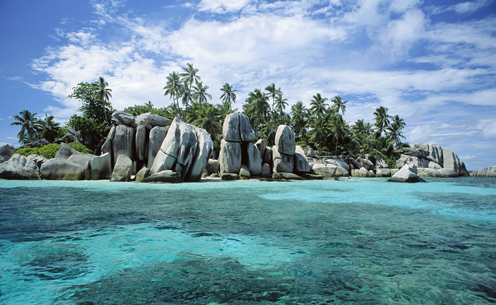 Aldabra Atoll is located in the Indian Ocean, 420 km north-east of Madagascar and 1,100 km south-west of the Seychelles, and is a unique nature reserve, which is still untouched by civilization.

The atoll consists of four fairly large islands, enclosed by a coral reef around a shallow lagoon.These tropical islands have been used by people for centuries. However Aldabra was an atoll least invaded by humans, because it was renowned for bringing bad luck to sailors. In the last 100 years Aldabra served as a base for mangrove timber loggers, fishermen and turtle hunters. As always, together with humans came domesticated animals, but this invasion was only limited to its southern and eastern parts.

Due to its isolation, Aldabra has lots of curious endemic flora and fauna dwelling on two types of terrain, characteristic to the area – shrubs and palm trees, which grow around freshwater lakes.  The remaining area is impenetrable thickets of thorny bush and tall dry grass.

The biodiversity of Aldabra can be compared to Galapagos Islands. There are more than 1,000 species of insects, including 127 species of butterflies and moths, 36 of which are endemic, a variety of land snails and crustaceans, as well as the Seychelles flying fox, freshwater fish living only in rainwater and the largest beast of the atoll – Aldabra giant tortoise. The global population of giant tortoises is only 150,000, and at least 100,000 of them live on Aldabra. Another curious creature living on the islands is Aldabra Rail – the only flightless bird of this type left in the world.

Gallery: Aldabra - home of the most remaining giant tortoises