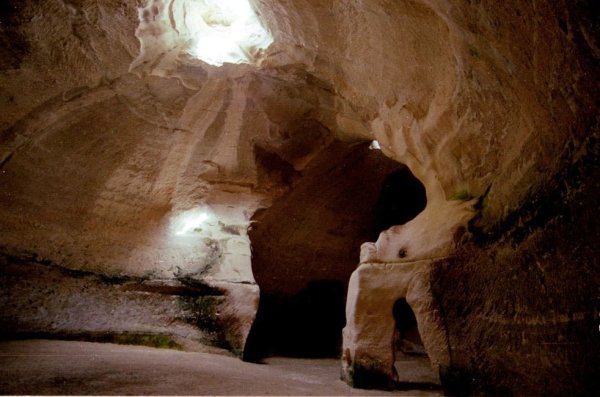 Beit Guvrin National Park is located in the hills  400 meters above sea level and is composed of Cretaceous (chalk) rocks. The park occupies a huge area of 1300 acres of land. Beit Guvrin is an entire underground city with many passages and halls.

Beit Guvrin first mention was in Zenon Papyri (259 BC). Sedonian people, who lived there, noticed that the rocks of these hills are easy to work on and began to build a variety of farm buildings inside the hills. Gradually this place turned into a huge underground city. They constructed a huge dovecote gouge with many small windows in the walls - they used pigeons for food and ritual services. Sedonians also quarried stone, processed olives, and built wells. There are several burial caves with petroglyphs resembling Egyptian murals in the pyramids. The burial caves were for the Greek, Sidonian and Edumite inhabitants of Beit Guvrin. The first and largest cave has paintings of animals, real and mythological, above the niches where the corpses were laid.​

Almost every house of the city had access to the entrances to the underground caves, so when the invaders would come, the locals successfully hid in the family vaults.

Besides the underground caves there are bell caves as well - giant rooms with small openings in the ceilings,  resembling huge bells. These caves in particular attract all the tourists and rock climbers (if you want to slide down a rope into the cave, the club "Ashdot" can offer their services). There are about 800 bell-shaped caves in the area, however many are not accessible. These caves were dug during the Arabian period for chalk to cover roads.

Beit Guvrin thrived in Roman times and during the times of the Crusaders. The Roman amphitheater, some churches and cathedrals, such as the Church of St. Anne, survived to this day.

The location of Beit Guvrin settlemets was popular due to its geographic location. Trade caravans coming from Jerusalem towards the sea, stopped here often. Also, it was a great defense point and due to its location on a hill.

The journey through the National Park of Beit Guvrin is indeed interesting and exciting. Once here, you will be able to experience the culture of several people from different historical eras - Sidonian, Arabian, Roman and Byzantine. Most inquisitive visitors will enjoy squeezing through the narrow underground passages, through which the inhabitants of Beit Guvrin fled from the invaders.