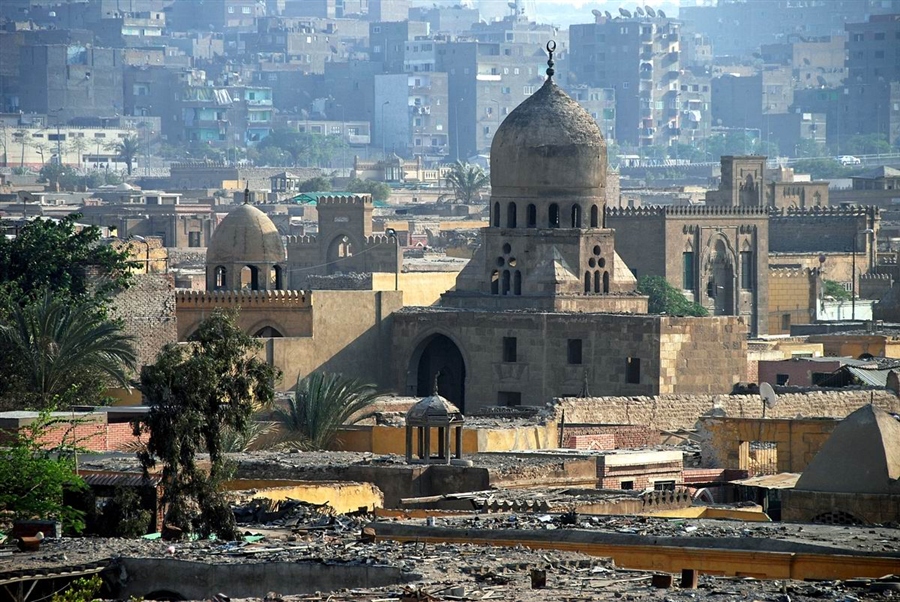 City of the Dead, locally known as Al Qarafa (Cemetery), stretches for more than 6 km from the north to the south of Cairo. This is one of the oldest cemeteries in the world – it is more than 2000 years old. Here lie both the bodies of sultans and simple mortals.

The main feature of this Cairo necropolis is that it is, without any exaggeration, full of life. Nowadays the number of the dead  in this "city" is almost equal to the amount of the ones living there. The cemetery consists of graves and family mausoleums plus the houses and shops of the living. Some of them chose to live there to be closer to their departed loved ones, others had no choice – they were homeless, and many of those live right in the crypts and look after the tombs as well. There are even cars and buses that drive around the place – you could say that it is a city within a city. Due to the amount of homeless people living there and taking care of their surroundings, there is actually less waste in the City of the Dead than in any regular street of Cairo.

The tendency to move into the cemetery originated in the 1960s - the poor and homeless, as well as the Suez Canal area refugees started settling  there. The amount of settlers became threateningly large very  fast, and the Egyptian government tried to cope with this situation by providing housing in the vicinity of the cemetery. As the number of residents as well as the number of the graves increased, the residential areas had no other choice but to start moving into the necropolis area - the settlers eventually populated the tombs and the mausoleums.

The place is not very touristy – the city officials do not like to advertise it, but if you go there you will get a strange and unforgettable feeling, as if you have just visited a cursed place.

Gallery: City of the Dead, Cairo

Read more about Egypt off the beaten path

The House of Mirrors