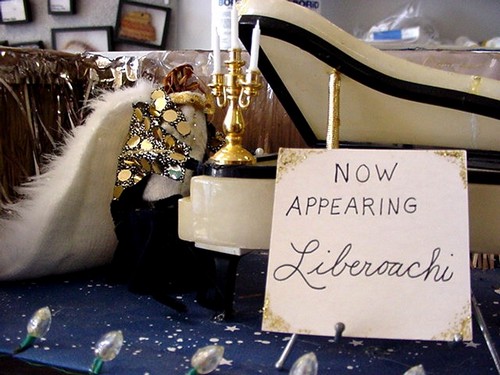 Cockroaches have been the nemesis of mankind since the dawn of man. These “great survivors” withstood the Ice Age and all kinds of roach sprays just to grace your kitchen with their presence once again. However, for the creative and open-minded the sky is the limit and even the cockroaches can be a ticket to Hollywood. Hard as it is to believe, but of all men, a bug exterminator, Michael Bohdan, managed to get his lucky chance to become famous by showing his cockroaches to the world.

This owner of a pest control agency “The Pet Shop” with years of experience of dealing with pest infestations, decided that it was time to bring some artistic touches to elimination of the hatred towards insects in people’s home. He accomplished his dream by opening a museum, where you can see cockroaches pose for you in the most unexpected scenarios. The idea behind the creation of the museum was found to be entertaining not only for its owner, but also for thousands of its visitors and even TV and cinema producers.

“The Cockroach Hall of Fame and Museum” in Plano, Texas, USA, is basically a collection of decorated little scenes with dressed-up dead roaches. The exhibits show about 25 insects in costumes like tutu or formal dresses. The roach-figures of celebrities and notable people never stop amusing the museum's visitors. There is a Marilyn Monroach, David Letteroach, Ross Peroach or Liberoachi, and more . The Cockroach Hall of Fame even has its own Roach Statue of Liberty!
Scenes of cockroaches posing as boys on a summer vacation surfing and sunbathing make everyone laugh, but what is really amazing is that even those who can’t stand the sight of insects can appreciate the hard work invested into creating the tiniest details of their costumes. Just imagine the preciseness it takes to make sunglasses for a roach! To further impress you with the wide range of themes chosen for those weird miniatures, here’s what the museum holds for its visitors: cockroaches playing football, relaxing in a motel, playing the piano and dancing. Several dioramas are also centered around the patriotic USA theme and others even feature sound effects.

Those brave enough to touch real living cockroaches, can be introduced by Michael Bohdan to the living exhibits of his collection - the largest cockroaches not only in Plano, but in the entire Texas. Museum serves as a home for live specimens of hissing Madagascar cockroaches as well. When they die, they become decorations for their owner’s hat. To those surprised and shocked by such an exhibition, Michael Bohdan answers "If Australia can have the Crocodile Dandy, why can’t the USA have a Cockroach Dandy"?

After eyeing the roach exhibits, you can also try the yummy barbecue-flavored Worm Snacks made of dried roach larvae.

The mystery of Síle na Gig