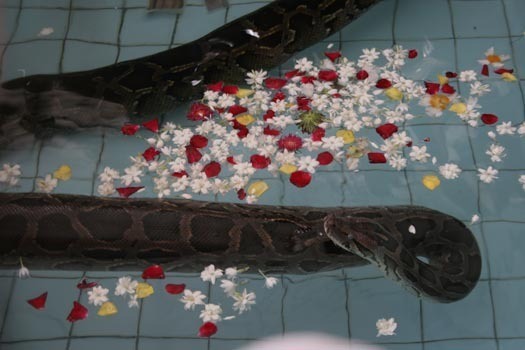 There are plenty of pagodas in Burma, but there is a really special one 45 minutes away from Mandalay – the Snake Pagoda, or Hmwe Paya. It houses massive pythons, happily coiling around the Buddha statue inside.

Snake Pagoda was built in 1974. According to a legend, a Buddhist monk from the old pagoda on the site saw two large pythons circling around the statue of Lord Buddha. He took the pythons, returned them to the jungle, and went about his business. The next day snakes were back, together with a third python. Again, the monk carried them to the jungle, but they kept returning each day. This made the monks believe that the pythons were reincarnated souls of monks who served the pagoda, and they decided to take care of them.

When the original snakes died, their remains were preserved in the pagoda, and new snakes were donated by devotees. The monks take care of the snakes, bathe them in special basins filled with flower petals, dry them with saffron and red towels – the traditional Theravada Buddhism colors - and feed them with milk, eggs and goat meat. Obviously, no python would want to leave the pagoda after such royal treatment.

Thousands of followers make pilgrimage to the temple each year. The snakes never hurt anyone and seem to be very happy when touched by the visitors. Inside the pagoda there are many photos of the visitors posing with the holy serpents.

Read more about Myanmar [burma] off the beaten path