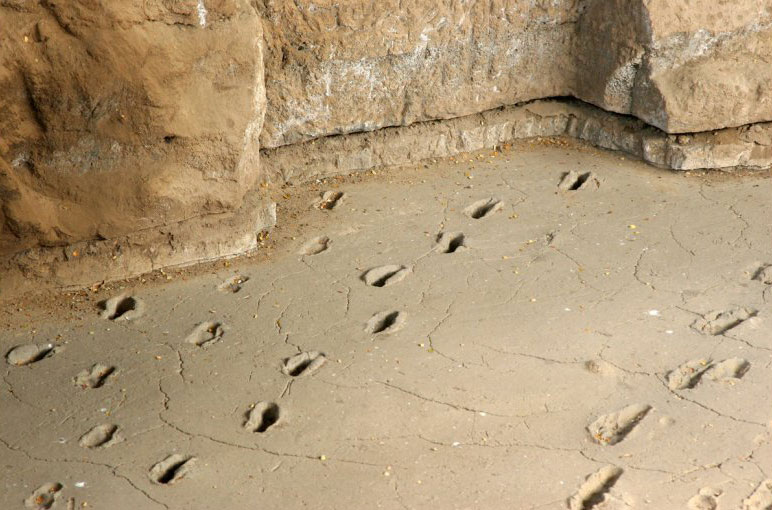 Museo Huellas de Acahualinca is one of the very interesting places in Nicaragua.  The uniqueness of this museum is that they are exhibiting footprints of ancient people and animals that lived in the area centuries ago, which got imprinted in volcanic lava. It is sometimes believed that these footprints belonged to the ones, who were trying to escape the volcano eruption on the shores of the lake Managua, however the distance between the footprints resemble a walking gait. The footprints belong to a group of around 10-15 people – men, women, and children. The animal footprints indicate that they were not traveling with the humans. The only similar exhibition can be seen in Pompeii.

The layers of lava with the footprints of the inhabitants of the area were discovered by construction workers in 1874. The detailed analysis allowed the scientists to conclude that the age of the footprints was over 6000 years. Essentially,  these are the oldest human footprints ever found in the Americas. The footprints started being exhibited in the museum since 1930s.

In addition, the museum has a number of valuable archaeological finds made in Nicaragua. They have the footprints of a mammoth, tools and accessories related to the pre-Columbian era, the collection of excavated ceramics, which ranges from utensils to funerary vessels. There is also a small library for children.

In: volcanoes, museums and collections, disasters, wildlife, nature vs man

Read more about Nicaragua off the beaten path

Find more off the beaten path near: Managua