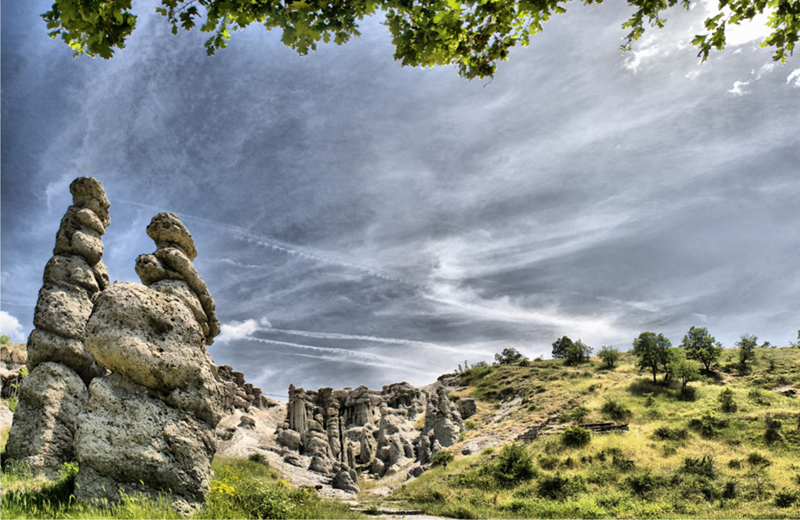 There is a petrified wedding party in Kuklica, eastern Macedonia, located in a small valley near the the village road. Legend says that a young maiden fell in love with a lad from the village. However, the maiden was also an object of adoration for an old, ugly and dirty sorcerer, who occasionally gave her nasty hints about his feelings. The maiden rejected all his advances, and when she realized that that would not stop the sorcerer, she complained to her lover.  The lad became quite furious, went to the house of the old man and beat him up. Since then, the evil grandpa refrained from approaching the maiden and life went on without any trouble. When the couple decided to wed, all guests were invited to the village center to celebrate the event with wine and crumpets. Suddenly, in the middle of the celebration of life, the vile old sorcerer appeared, and cast a terrible curse upon all the wedding guests, turining them into lifeless stone statues.

Another legend tells a story of a groom-to-be, not being able to choose between two women and deciding to marry them both separately and in secret. His plan did not work, and one of the brides saw the wedding preparations for the other woman. Infuriated, she cursed the whole wedding party and everyone turned to stone.

Since then, many years have passed, and no trace remained of the village. No one is certain whether the village existed at all. However, the rocks in the valley still stand there, resembling the guests, the parents of the bride and the groom, the in-laws, and two slender silhouettes of the lovers in the middle of the circle, gazing into each other's petrified eyes. Because of the pillars' resemblance to stone dolls, the place is called “the valley of the dolls” - Kuklica in Macedonian.

From the scientific point of view, it was neither witchcraft nor evil eye that created these strangely shaped pillars, but a good old erosion, about 10 million years ago. These 120 bizarre stone figures are the result of the wind working in the valley.

Kuklica is quite small and not an easy place to find, and it is recommended to hire a tour guide to get the most out of this experience.

Read more about Macedonia off the beaten path

Find more off the beaten path near: Kratovo Kruševo Skopje