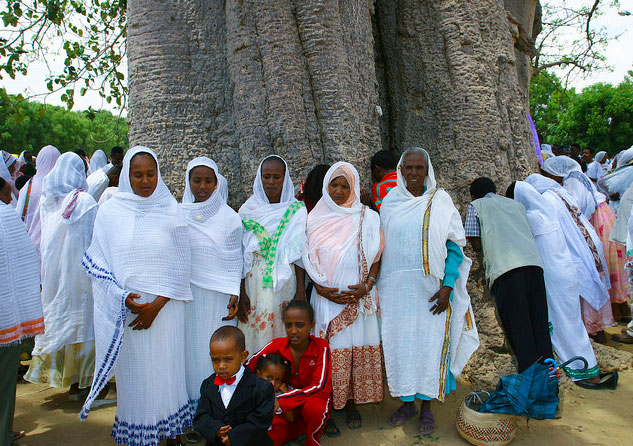 The most interesting attraction of Keren, Eritrea, is Madonna of the Baobab or Maryam Dearit chapel. Italian nuns built a chapel inside a baobab tree, which can accomodate 4-5 people in it, with a small statue of the Madonna in the altar area, decorated with ribbons. The chapel inside the tree has a circumference of 6 meters.

This baobab started its life in the late Middle Ages and it symbolizes fertility for Eritreans. Eritrea was colonized by Italians in 1890, but during the WWII the British expelled them from the land. During the air raids of the British, Italians hid inside the baobab, and although the tree was hit various times, it managed to survive together with the people inside it. This, of course, was the proof that the tree has divine powers. Nowadays, if a woman wants a husband or children, she has to go inside the baobab and prepare a cup of coffee in there. The tree is also an important place of pilgrimage, and thousands of pilgrims come to the shrine every year. The statue of Madonna is taken out of the baobab and carried on the shoulders of the pilgrims, while the others dance, sing and pray.

Read more about Eritrea off the beaten path