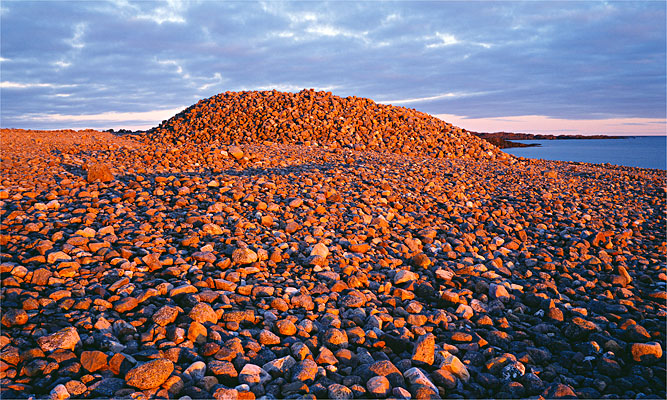 Mølen beach is located on the island by the same name in Larvik,  in the south-eastern part of Norway. The beach is famous for its wonderful scenery of rocks and the coast.

In Old Norse, “mol” means a man-made pile of stones. These piles of stones were used by ancient Norsemen to mark burial sites. Mølen  is the largest beach of rolling stones– there are 230 rock piles assembled on it since the most recent Ice age around 10 000 years ago. During the excavations,  burnt stones and nails were found, which is presumably the result of cremations. There are 16 large stone mounds, and about 200 small ones. It is possible that the small ones symbolize fallen or shipwrecked  warriors. Many of the mounds have traces of “haugbrot” - the ritual removal of the dead. It is also possible that the bigger piles of stones were the burial places of the more powerful members of society, while the small ones were for ordinary people.

In other words, the beach is a massive ancient cemetery. Although this might be thought of as a grim place, these graves served as sea markers between different trading centers, which exchanged goods and transported them to nearby settlements.

Burial site or not, the place looks amazing, combined with the natural beauty of the round rocks and the seashore. Besides enjoying the view and feeling the energy of old Norsemen, you can study the species of the stone specific to the Larvik area, and watch migratory birds – about 316 species of them land in Larvik, heading north in Spring and south in the Fall. There is also a surfing area of the beach.

Read more about Norway off the beaten path