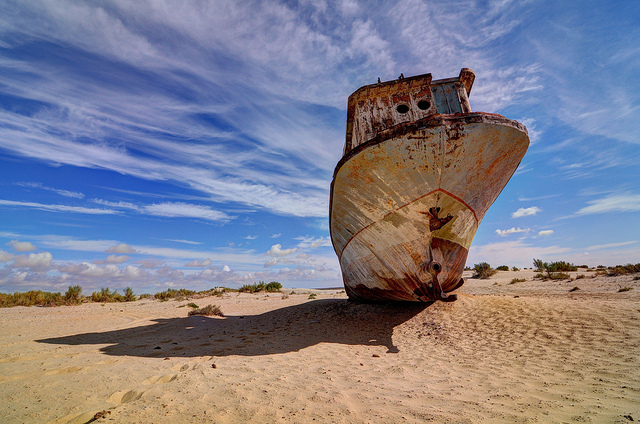 Once a thriving port city with lots of happy citizens, Mo'ynoq is now considered one of the creepiest places on Earth. Its harbor has turned into a graveyard of ships, where herds of goats wander around the rusty vessel carcasses and dead crooked trees. What happened to the sea that Mo'ynoq stood on is considered one of the most severe anthropogenic ecological disasters of all time.

Mo'ynoq, a town in Karakalpakstan, Uzbekistan, was once located on the shores of the Aral Sea. In 1960, its fishing industry was bringing up to 60,000 tons of fish. The lake, which was referred to as “the sea” for its superb beaches, an abundance of fish and very large size, is no more. Now locals call it Aral Kum – the desert of Aral. The ships that sailed the waters of Aral are now abandoned and buried in the sand, sinking into oblivion, creating a sight of a terrifying post-apocalyptic machinery graveyard.

Until the mid-20th century, Aral Sea was the fourth largest lake in the world, with its area of 66,000 square kilometers.  In just 34 years, from1961 to 1995, the sea level dropped by 17 meters, and the shoreline receded by 100 - 150 km. 33% of the seabed got exposed to the massive air stream in the area, which still continues spreading up to 100 million tons of dust and salt from the bottom of the long gone sea. If salt and dust don't sound too bad, add to it the layer of pesticides that was resting on the bottom of the sea.

Back in the Soviet days the volume of chemical fertilizers used in the fields of the Republic of Uzbekistan was 7 times larger than in the rest of the USSR. Uzbekistan was a major cotton producer for the Soviet Union, and  it was decided to construct irrigation stations and reservoirs in Karakum and Big Fergana to increase the production of cotton. The rivers that fed the sea were diverted into irrigation, which caused the sea to slowly evaporate. In turn, most of the pesticides from the fields got washed back down into the sea via irrigation system, causing the water to become toxic and evaporate at a faster pace - now the pesticides are being actively spread by the winds, which contributes to poor ecology, high numbers of infant mortality and chronic diseases among those who remained to live on the coast of the former Aral Sea. If the rivers were diverted back into the sea, it could have helped the problem, however the economy of Uzbekistan is too weak to be able to use any alternative sources for irrigation.

Whatever remained of the sea is now more than 150 kilometers away from Mo'ynaq. However, the traces of the old seaside life can be found almost everywhere. At the road entrance to the town area, there is a post with Mo'ynaq's coat of arms, which depicts a fish. A monument to the heroes of the WWII stands on a steep rock facing the long gone sea, which is now a desert. There are fishing-themed murals, mosaics and faded posters all over the city. In a twisted way, the place has become a sort of a pride of the region, since many off the beaten path travelers come to see this symbol of human thoughtlesness and cruelty to the nature's resources that keep us alive.

Gallery: Mo'ynoq - the city of the dead ships

Read more about Uzbekistan off the beaten path 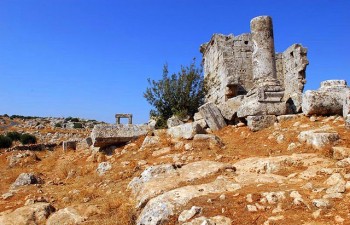