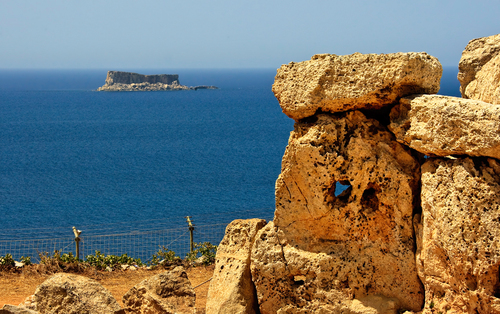 Egyptian pyramids were considered the oldest structures on the planet until Maltese megalithic temples were discovered. Besides being more ancient than the pyramids, Stonehenge and Carnac, the temples of Malta are distinguished by their “density” - more than twenty of those are situated on an area comparable to a small European city.

Ħaġar Qim, translated as “standing stones”, is a megalithic temple complex dating back to 3600-3200 BC, the Ġgantija period of Maltese ancient history. Ħaġar Qim stands on top of Dingli cliffs overlooking the sea and the tiny islets Filfla and Filfoletta (the names of which probably derived from Arabic “filfel” - peppercorn) . It is a single temple structure, although it is unclear whether it was originally a four or five-aisled building. It is constructed out of huge semi-finished stone blocks, which form dolmens (tombs covered with massive capstones), menhirs (upright standing stones) and cromlechs (circular fence).

The building blocks of Ħaġar Qim are up to 8 meters in length and weigh tens of tons. How it was possible for the people of that era to create such impressive constructions from large slabs of stones laid so tightly that there are practically no slots between them, remains open for speculations. Local legends have it that the temples were built by a race of giants.

A more reasonable explanation of the ancient temple-building technique is that the builders developed an entire technology for constructing these complexes. First, they dug a pit with one vertical and one sloping side. The vertical side would be strengthened with logs, and then they would roll up large stones on wooden rollers, dump them onto the sloping side and drag them into the pit to build the temples' foundation. Stacking blocks in the desired position had to be quite slow, but in the end the goal would be achieved. When the foundation was laid, the rest was built using the same tools. The temples were built out of coral limestone, which is quite soft and has eroded significantly through the years.

Nowadays, in this archaeological park, you can see the trilithon entrance to the temple, an outdoor bench and standing stones next to the entrance. The temple has a wide fenced courtyard – the bastion, which leads to the center of the building. There is also a separate entrance, which leads to four separate structures, built in place of the north-western apsis – the Northern Temple with Women's Chamber, with an “oracle hole”, where you could hear sounds from the main temple. Many interesting items were excavated at Ħaġar Qim site – a decorated altar in the form of a column, two altar tables, sculptures with ornaments, and several “fat lady” statues – the Venus of Malta. The Venus of Malta is particularly interesting because it is asexual.

Close to Ħaġar Qim, there are ruins of Mnajdra temple, with its exterior and courtyard matching the same building pattern. For each equinox and solstice, Mnajdra aligns with the sun – the sun rays go through the door of its lower temple and light up the main axis of the building.  The standing stones on the right and  left sides get lit up by the beams of the sun on summer and winter solstices. Mnajdra temple was used for ceremonial sacrifice – many knives, restraining ropes and animal remains were excavated at the site.

Since 2009, the temples have been covered with a protective fabric to prevent further erosion and deterioration. It doesn't obstruct the astronomical alignment, but may disappoint some photographers by interfering with the natural landscape.

Gallery: Older than the pyramids : Ħaġar Qim and Mnajdra