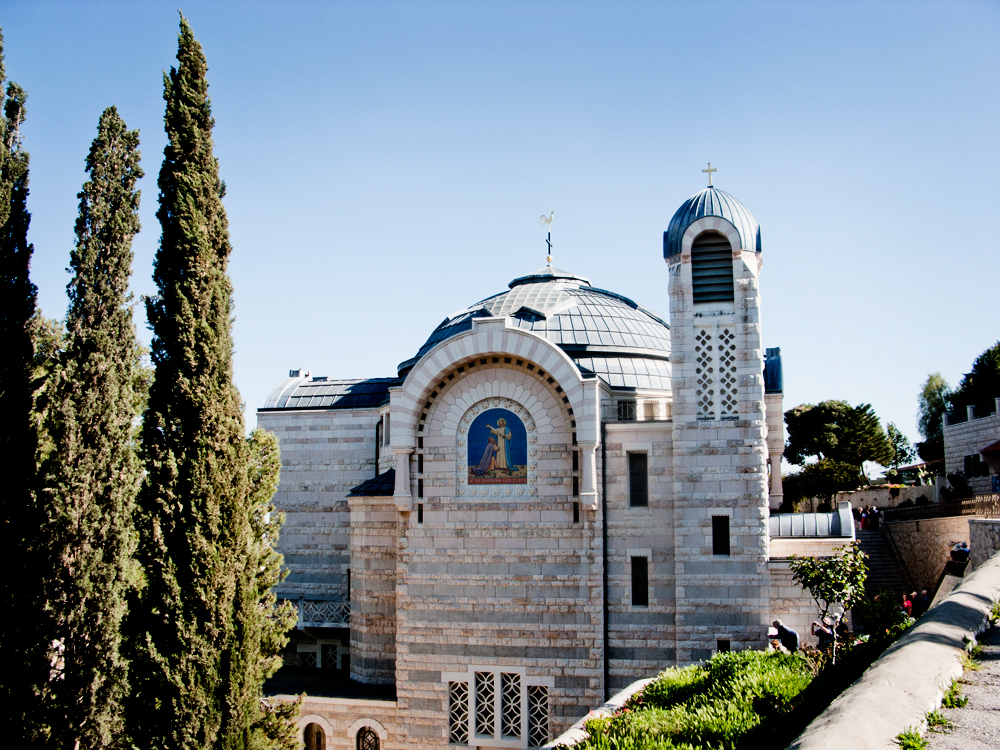 Joseph Caiaphas was the Jewish high priest, who is believed to have been involved in the Sanhedrin trial of Jesus and to have organized the plot to kill Jesus. This historical figure has been quite interesting to the historians, given that he was the longest serving high priest of the 1st century, whose priesthood outlasted Valerius Gratus and Pontius Pilate. Since the 4th century to the present day,  the location of Caiaphas' residence has been a subject of much speculation.

Once pilgrims started visiting Jerusalem, they tried to seek out all the sacred sites to feel more connected with god. One of these sacred places was the location of Jesus' trial in front of the high priest. The oldest pictorial map of Jerusalem, shows Caiaphas' palace on Mount Zion, however it is not clear enough to pinpoint the exact location of it.

Nowadays, the main contenders for the site of Caiaphas' palace are the Assumptionist site, on the eastern slope of Mount Zion and the Armenian site.

From 1888 to 1914, French Assumptionist archaeologists carried out excavations in the area, which revealed a 5th century church, The Church of St.Peter in Gallicantu, or St.Peter of the Cockcrow. This church is famous as well for being the place where Peter denied Jesus three times, then repented and reconciled with Christ after the resurrection. The church is noticeable by the golden rooster atop a black cross, symbolizing the prophecy that Peter will deny his master three times “before the cock crows”.

According to the assumptionist beliefs, the scene of Peter's disgrace was the courtyard of Caiaphas. Below this church, excavations revealed a large grotto, which may have been originally a tomb, which later served as a prison. The grotto is supported by seven pillars, the eighth pillar was missing and could have been the one against which prisoners were scourged. Besides that, excavators found a collection of Jewish weights and measures, and an inscription containing the word “korban”, which means “offering” in Hebrew. Thus, it was concluded that this site was none other than the palace of Caiaphas. This assumption is arguable due to the fact that a high priest would not be living anywhere near a former tomb according to the purity laws of Judaism. In addition to that, the excavated area is much smaller than described in 530 AD by Theodosius – a pilgrim to Jerusalem, who documented his observations in a work called “On the Topography of the Holy Land”.

The Armenian site is the grounds of Armenian monastery, existing since the 15th century, which is also built on top of a much older church. The area was excavated by Israeli archaeologists in the 70s, and revealed a number of luxurious homes from the Herodian era – large two to three floor houses with water installations, cisterns, baths, pools and mosaic floors. One of the particularly remarkable houses has frescoes containing birds. Obviously, those were the houses of the wealthiest citizens of the city. The estimated area of the place also fits better with Theodosius' description. Many scholars prefer this location to the one mentioned above, however, there are claims that some of the houses did not belong to the Jewish household, or that it could not have been this close to the location of the Last Supper – the Church of Holy Zion, which is only 50 paces away.

Jerusalem was destroyed in 70 AD, its citizens scattered, both Jews and Christians were persecuted throughout the empire, and the exact location of the sacred Christian places were not easy to find. Many houses were looted and burnt, and according to the Romano-Jewish scholar Josephus' writings, the city of Jerusalem was unrecognizable. Even if anyone returning to the city after its destruction knew the exact location of the palace of Caiaphas, it would have been nearly impossible to find it.

After the conversion of Constantine in the early 4th century, when the influx of Christian pilgrims started growing, the location of many forgotten sacred places were invented, since there was no other way of finding their exact coordinates. Even central sites as Golgotha and the tomb of Jesus are contested to this day.

As of now, the precise location of Caiaphas' palace remains unknown, however you can visit the Church of St.Peter in Gallicantu and see the alleged guardroom, the prisoner's cell, Byzantine-era mosaics, the steps that Jesus trod, and some contemporary religious art; or try to look past the walls of the Armenian monastery – last time we checked, it was closed to the visitors.