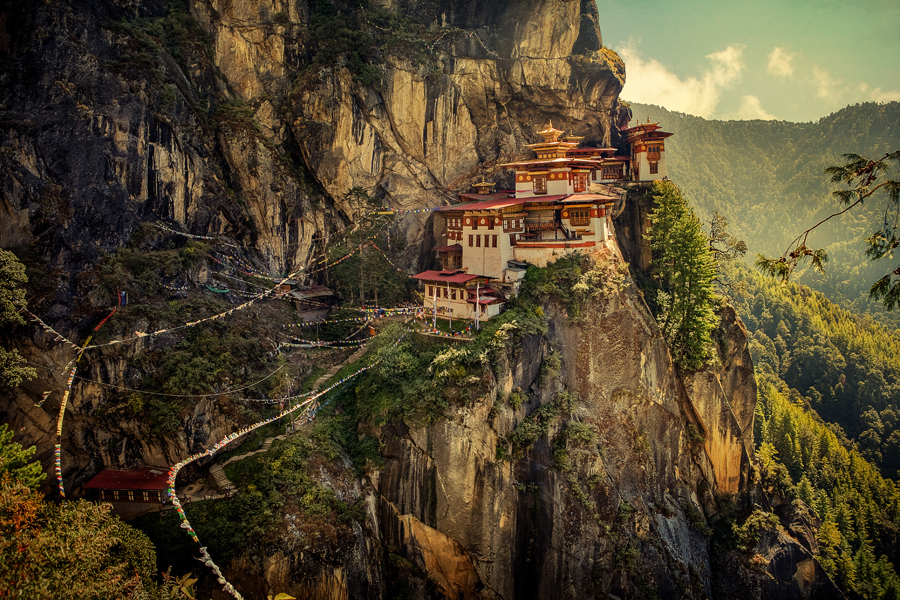 Paro Taktsang, or Tiger's Nest, in Paro, Bhutan, is one of the most impressive Buddhist temples. The view of this monastery will enchant anyone who sees it. Paro Taktsang is located right at the edge of a cliff, at an altitude of 3120 meters above sea level and 700 meters above the valley of Paro.

Paro Taktsang was built in 1692 and today is considered one of the holiest places in Bhutan. The legend about the origins of its name dates back to the 8th century and is connected to Guru Rinpoche, or Padmasambhava. Guru Rinpoche is revered as the second Buddha, because of his great contribution to spreading Buddhism throughout Tibet and Bhutan.

In the 8th century, Padmasambhava arrived to this place from Khenpajong flying on the back of a pregnant tigress. He liked the area and its atmosphere so much that he called it the second Kailash, the precious jewel of the snows. Mount Kailash in Tibet is a sacred place for Bön, Buddhism, Hinduism and Jainism.  Local evil spirits did not like Padmasambhava's intrusion into their domain, and they gathered all the dark forces to attack him. To resist and subdue the evil spirits, Padmasambhava assumed one of his eight manifestations -  the horrible Guru Dorje Drolö. He spent four months meditating in a cave under the temple to tame, subdue and defeat all eight types of malicious entities of the mountain. After these events, the place became holy and Guru Rinpoche started converting the Bhutanese to Buddhism.

It is still believed that Paro Taktsang holds the hidden secret treasures of Padmasambhava - his writings about the conquest of the dark forces and self-improvement.

To ascend the holy place you will, first of all, need a special permit, if you are not a citizen of Bhutan. Unless you are flying in on a tigress, expect a two hour climb on a steep trail after gathering all of your courage. When you are getting close, there is a chasm dropping a couple of thousand meters with steps carved right into it and no handrails, and then another climb up the canyon. Then you are faced with a 100 meter waterfall, which you have to go through at its base and some more steps toward the monastery, if you managed to survive the terror. Bhutanese locals have absolutely no problem going up and down this way merrily and with great ease.

The monastery consists of four main temples and residential areas for the monks. There are eight caves, four of which are relatively easy to access. The cave where Padmasmabhava entered riding the tigress is called Tholu Phuk, and the cave where he meditated is Pel Phuk. Tholu Phuk has multiple Bodhisattvas and the sacred scripture written in gold dust and the crushed bone powder of a divine Lama. The other structures are Taktshang Zangdo Pari, where Rinpoche's wife, the Fairy of Wisdom, founded a convent, and the Urgyan Tsemo, the prayer wheel. The walls of the monastery have paintings telling the legend of Guru Rinpoche and depicting Naga demigods, who hold the hidden treasures of the monastery, and Walkers in the Sky.

Although it might sound terrifying, if you are able to overcome the fear, you will feel a close connection with nature and be enchanted by the breathtaking views of the valley beneath you. The monastery keeps appearing and reappearing through the vegetation and the sound of its bells creates a truly meditative feel to your journey. The monks say that the climb itself is an integral part of the spiritual cleansing for the ones who want to enter the Tiger's nest.

Read more about Bhutan off the beaten path

Find more off the beaten path near: Gangkhar Puensum Paro