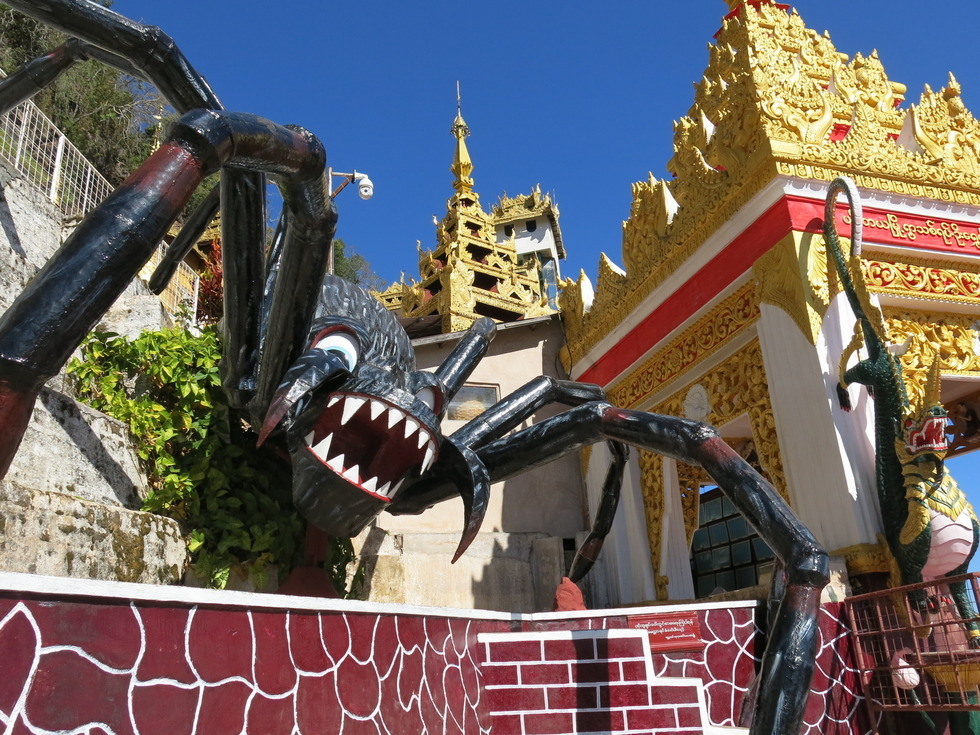 Pindaya cave is an important place of pilgrimage for Theravada Buddhists in Shan state, Myanmar. The cave holds about 9,000 Buddha statues made out of different materials – bronze, marble, gypsum, wood or other material. No other place in Myanmar displays such a range of styles of Buddhist iconography, dating back to 1750.  The collection keeps growing due to pilgrims and donors who visit the cave. There are seventy truly unique images of Buddha, which came from Mahayana Bhisakkaguru cult, which supposedly used the cave back in the day. These Buddhas are completely different from other images from Myanmar.

The cave is located in a limestone hill in the vicinity of Inle Lake. The hill has three caves, but only this one is open to the public. It is 150 meters long and literally cramped with Buddhas up to the ceiling. Some parts of the cave are so small, you have to crawl to get into them.

To enter the cave, you must pass Shwe Oo Min pagoda, built in 1100 by the king Alaunsithu, guarded by a gigantic spider. Legend says that once a giant spider captured seven princesses and hid them in the cave. The princesses were resqued by Prince Kummabhaya, who shot the spider with an arrow and screamed “Pinku Ya-Pyi!”, which means “I shot the spider!”. Over the centuries, these words truncated into “Pindaya”. To commemorate the legend, the sculptures of the spider and the prince were added by the entrance to the cave.

Upon passing the spider, the Golden Shwe Oo Min pagoda, and a hall decorated with mandalas, you will find yourself in a maze with thousands of stone Buddhas, after which there are many rooms with stalactites, cave lakes and illuminated Buddhist altars. Some rooms are still being used for meditation. Judging by the density of Buddha images from the entrance of the cave to its depth, the Buddhas were first stored closer to the entrance, and more of them are being added as the cave goes farther – the “newer” Buddhas are the last ones in the cave.