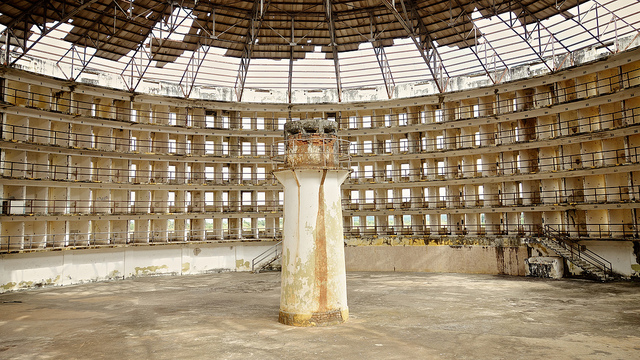 Presidio Modelo was once a "model prison", located on the Cuban Isla de la Juventud. The prison was built in the period between 1926 and 1931, during the repressive regime of Gerardo Machado. The project was designed in a very clever way, following the Panopticon ideas of the British philosopher and social theorist Jeremy Bentham. Panopticon is designed in a way that allows a guard to observe all prisoners without prisoners' ability to see whether they are observed.  Presidio Modelo was considered the definitive example of this effective design, because it allowed to control more than six thousand prisoners with a minimum amount of staff. The place soon became infamous because of its unprecedented level of corruption and cruelty.

Presidio Modelo consisted of four six-storey blocks with a central circular watchtower and prisoner cells around them. Each cell extends over the entire thickness of the building, which allows for internal and external windows. Prisoners thus have access to natural light, are isolated from each other by walls and can easily be viewed by observers from the tower that remains invisible to the convicts.

During World War II, many German and Japanese prisoners of war were kept here. Among the most famous inmates were Fidel Castro and other Moncada rebels, who were here from October 1953 to May 1955.

After the revolutionary triumph of Fidel Castro in 1959, Presidio Modelo was used to imprison political dissidents, counterrevolutionaries, homosexuals, Jehovah's Witnesses and other traitors of the socialist Cuban State. With the beginning Castro's rule, about 6,000 - 8,000 political prisoners were turned in immediately. In 1961, riots and the hunger strikes broke out due to overcrowding and appalling conditions of detention, and finally in 1967 the prison was closed. The old building now serves as a museum and is declared a national monument.

Read more about Cuba off the beaten path