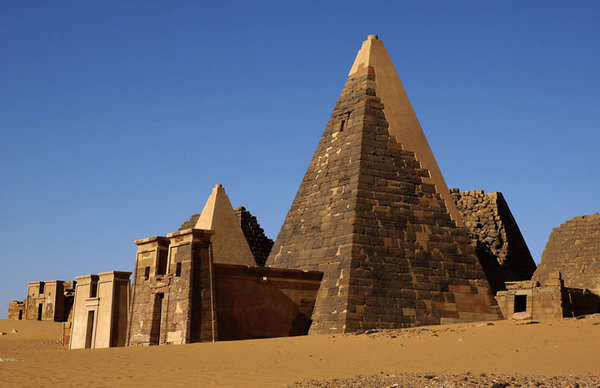 In the 4th century, the Kingdom of Kush, or Meroitic kingdom, which in occupied a vast territory on the banks of the Nile - from Nubia to Ethiopia, gradually split up into several small kingdoms. Meroitic kingdom bordered with the countries, which cultures were very different from each other – an inherently Mediterranean places like Egypt and other territories south of Sahara. Although the kingdom managed to retain its identity, the black pharaohs who ruled the area between Aswan (Egypt) and Karima (Sudan) also built numerous pyramids.

Little is known about the Kushite Kingdom, however it is clear that Meroe was an important location in one of the least researched civilizations in history. More than 200 pyramids are still standing there, to amaze the tourists and historians.

Around 700 BC the ruler of Kush conquered their northern neighbors. During this period, many Nubians borrowed ideas from the Egyptians, including temples, tombs, handicraft, artistic creativity and hieroglyphic writing. As for religion, the mutual influence of cultures was so strong that in some myths the gods of the Egyptian pantheon were replaced by Nubian gods and vice versa.  In particular, the Nubian Apedemak ("lion of the South") replaced the Egyptian Osiris.

In 300 BC Nubians left Egypt and moved their capital to Meroe. The new city was the southernmost city of the Meroitic kingdom between the Nile and the caravan route, which ran through the desert.

The rulers of the Meroitic kingdom, pharaohs, served the role of priests as well. Prior to the 4th century BC they were buried in pyramids, which had sharp angles and very narrow steps. Although the pyramids are similar to the Egyptian structures, they are unique in their Nubian style. The texts and art of this period suggest that the Nubians adopted the Egyptian view of the higher powers. Many tombs have visible signs indicating that people are buried here, as well as animals. Unfortunately, many of the tombs were ransacked, so it is unknown what luxury items and items might have been inside them. Some of the findings from oldest tombs were ushabti - Egyptian funerary figurines, and some of the later built pyramids had luxury objects from the Hellenistic world.

Gallery: Pyramids of the Kingdom of Kush

Read more about Sudan off the beaten path

Find more off the beaten path near: Shendi Suakin