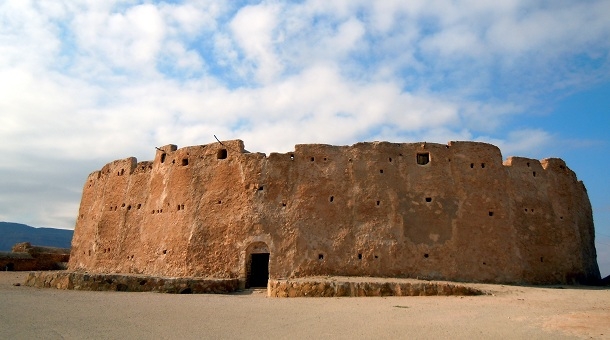 Qasr al-Haj is an ancient fortified granary. It is located 130 km from the Libyan capital, by Al-Azizia – Al-Josh road. This impressive circular structure was built and rebuilt continuously between the VII-XIII centuries.

The settlement of Qasr al-Haj is one of the biggest and most impressive examples of Berber architecture. In Libya, Qasrs had two purposes – in the times of peace they were used as to store grain and other products, and in war they served as fortresses.

Sheikh Abu Jatla was the one who started working on the granary construction in the second half of the XII century AD. The structure was built out of the local stone, plaster and clay, with palm tree wood doors. The windows were used either to let the light in or as loopholes. The grain was brought into Qasr al-Haj by all the inhabitants of the place, paying one fourth of the harvest to the sheikh for protecting the goods. Sheikh Abu Jatla was a deeply religious man, and he used the citizen's payments for storage to help the poor, the pilgrims on their way to Mecca, to support mosques and  Quran teachers.

Originally there were 114 the storage chambers in the granary, which most likely corresponds to the number of families who used the premises in the first years after its construction. 114 is a symbolic number – that is how many surahs (chapters) there are in the Holy Qur'an. Later, the number of the chambers increased – some of  the old chambers were split in two to accomodate the goods of the new citizens. Now the granary has 119 chambers, as well as 29 new basements.  It is still in use, and entering the storage rooms is allowed under the guidance of the caretakers.

Next to the gate of the granary there is also a mini-museum of Qasr al-Haj, which displays various utensils, weapons, animal traps, skins and ancient clothing. The workers in the museum gladly demonstrate how to operate a particular device, answer questions and tell stories.

Read more about Libya off the beaten path