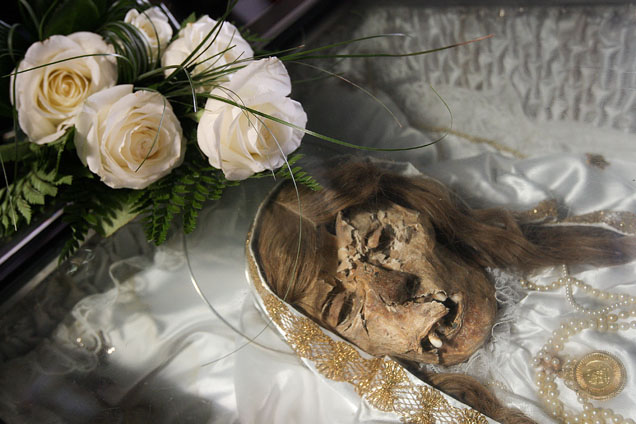 The chapel of St. Maria Adelaide is one of the attractions of Arcozelo, Vila Nova de Gaia. This place holds the incorrupt remains of St. Mary Adelaide in a coffin made  of glass.
Maria Adelaide is said to have performed miracles of healing, saved people from deadly diseases and helped them find love and be happy.

Maria Adelaide was born in 1835 and grew up in a convent, where she contracted tuberculosis. She had to leave the convent to take care of her health, and after some time and effort, her health improved, and she was able to continue helping poor and reading catechism to children.

She died at the age of 50, when a sudden cold made her health condition worse. Maria Adelaide was buried, and forgotten about for the next 30 years. In 1916 the land where she was buried was sold to a new owner, and when he decided to remove the coffin, the gravedigger was shocked by the fact that her  body and clothes remained practically intact, moreover, the body was emitting rose scent. It was not easy to keep this secret, and when it was decided that the body should be buried in a common grave, the locals invaded the cemetery and made the gravediggers re-exhume the body. Then, the local women washed the body and proclaimed her a saint. Eventually the body was placed into the chapel. Unfortunately, there was a couple of attempted robberies, which damaged the body.

Although the Catholic church doesn't recognize Maria Adelaide a saint, even now, people visit her dead body and ask for her help. The ones who feel that their prayers have been answered, bring jewelry and wedding dresses in gratitude. Throughout the time, the amount of gifts became so large that the chapel turned into a museum. Besides the variety of gifts, there are many thank you notes and photographs.

If you feel sick, you can also buy various body parts and organs made out of wax, attach a description of your health problem to that body part , and put it near the coffin to target Maria Adelaide's help to this problematic body part. You can also bring a photo of a sick or unlucky person and ask the saint to heal him/her.