​Travelers who want to do some sightseeing Peru certainly need to visit this very unusual place - the town of Maras salt baths or as they are called, Salinas de Maras. It's amazing how close the ancient Incas were to nature and how carefully they observed its processes. It was during the times of the Inca empire when the construction of salt terraces begun. The water in this place is so saturated with minerals that it produces salt when evaporating. Because of its salt mines, the city of Maras used to be a major supplier of salt for the whole of South America.

It was Incas who came up with the brilliant and simple idea of building mines in this place. The system was simple - they created "pools" surrounded by rocks, which would get the water from a local stream called Koripuhio, then after some time the water evaporates under the burning sun , and on the inner surface of the pools minerals are formed. These minerals are salt, which is always needed and used in many countries around the world.

Even now, salt gathering is performed by hand. The salt is then sorted - the most expensive, first-class salt comes from the upper layers of the pools, when the lowest quality of salt comes from the bottom layers. One pool produces about 150 kg of salt per month. Each local salt-gathering family takes care of several pools, so their work can definitely not be called an easy one. If you take a trip to the place, you can get a unique opportunity to try and gather some salt from the depth of the salt pool.

Naturally, this unusual place has many legends and stories about it. Many still believe that the Incas knew about the salt much more than the modern science, thus explaining the scale of its production in the Salinas de Maras. There is another legend that the place used to be a settlement of a powerful Inca cacique. One day, taxpayers revolted against his authority, and refused to pay tax to his emissaries. The chief decided to punish his recalcitrant subjects and appealed for help to the Sun God. The god's punishment for the villagers was a massive salt rain that engulfed the entire village, thereby leaving its residents to die in the absence of drinking water.

The landscapes of these places cannot leave anyone indifferent, however it is strongly advised to wear sunglasses when going to the salt mines. On a sunny day the salt pools valley looks like a giant flashlight due to the bright reflection of the sun from the surface of the salt crystals. The sight of the terraces is really unique, like thousands of honeycombs scattered on the mountain slopes. Due to varying degrees of salt concentration, and the refractive index of sunlight, the water in each of the pools changes its color from white to brown. At this distance, the salt mines look like a colorful mosaic made ​​of bizarre geometric shapes.

Salinas de Maras is not only an unusual and one of its kind landmark and a place of pilgrimage for inquisitive travelers - this place can also serve as a wonderful creative workshop for professional photographers and artists.

Read more about Peru off the beaten path 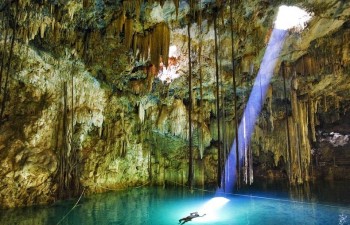