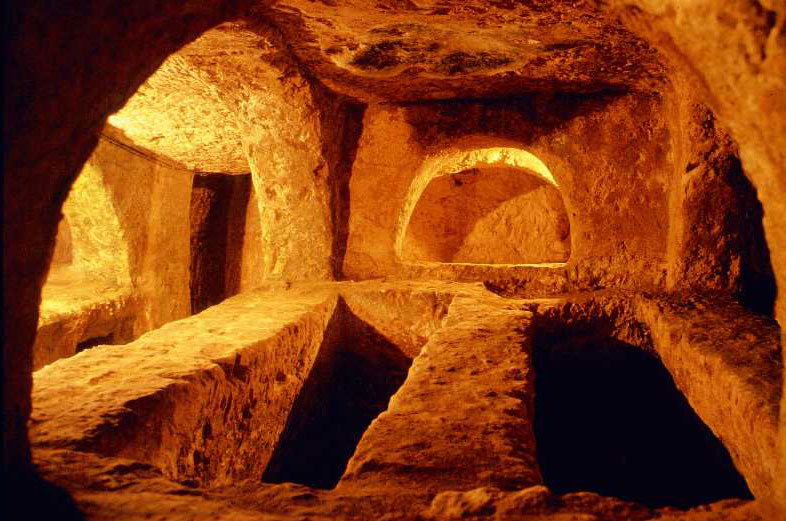 There are many catacombs of the early christian period under Rabat. The total area of this underground city is three square kilometers.  This sarcophagus city is located on several levels and is divided into two parts - the Catacombs of St.Paul and the  Catacombs of St. Agatha.

The catacombs of St.Agatha are named after a Sicilian lady, who fled to Malta in the 3rd century to hide from the persecution of Roman Emperor Decius. She hid in the crypt in Rabat and stayed there teaching children. Unfortunately, upon her return to Sicily,  Agatha was captured, brutally tortured and burned.

St.Paul's catacombs are named in memory of St.Paul's shipwreck in Malta, after which he stayed there for a while and met friendly islanders.

These catacombs resemble a big underground maze. It is hard to imagine how much work and time it took to carve various stone niches, rooms and entire halls. The purpose of these grandiose underground structures was quite utilitarian - the catacombs served as the necropolis, since the Romans buried their dead in outside the city walls of Mdina.  The deceased were buried according to their profession - this discovery was made when the archaeologists found a crypt where doctors are buried –  the images of the medical instruments, carved on a stone slab, served as the evidence to this fact. Now the catacombs became a must-see place – it is possible to hire a tour guide or you can equip yourself  with a flashlight and examine the most distant and dark corners by yourself. It is important to have a light, since there are many frescoes on the walls, which can't be seen in the dark.

All of the sarcophagi are cut from a single stone, among them there are one- and multiple-body sarcophagi. Some sarcophagi have such a massive top cover that they have a special opening through which more dead bodies can be placed inside. The length of each sarcophagus doesn't exceed 1.50 meters (five feet).