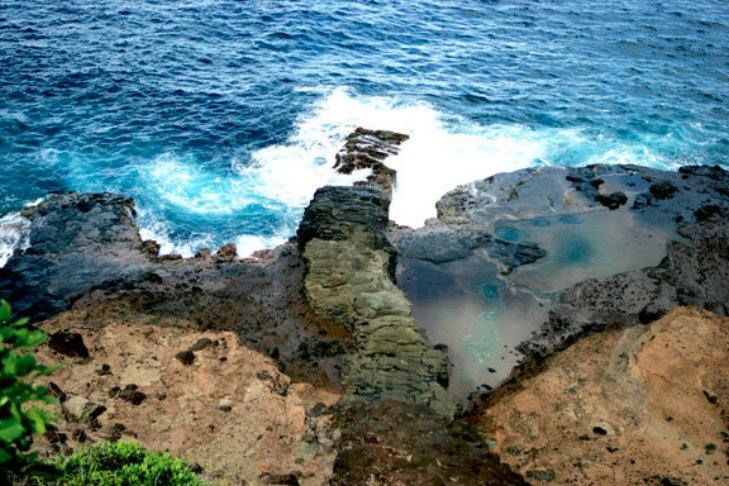 L'Escalier Tete Chien in Dominica, Eastern Caribbean, is an ancient geological formation connected to a Kalinago creation myth. The natural rock formation resembles a staircase coming out of the Atlantic ocean. Its name translates to The Staircase of the Snake.

Before the “New World” was invaded by the westerners, Bakwa, a huge Boa constrictor nebulosa from South American Minoco River traveled to the island of Dominica, decided to dwell in a cave on Majini Mountain, and established the first Kalinago village, Sineku. The dark thin trail leading to the island is the path left by the snake while it was coming out of the ocean.  If you follow the trail today, you will reach the cave in the mountain, where, according to the locals, the Great Serpent lives to this day.

The first inhabitants of the island would visit the Great Serpent and offer tobacco ashes by its cave. To communicate with the islanders, the Serpent would transform itself into a white man. The snake would repay the gifts of the islanders by providing them with medicine for the sick, luck for men with the ladies and other help.

The mystical staircase offers dramatic views of Caribbean coastline. It extends 200 feet from the ocean floor to the shore and is, in fact, remains of volcanic lava flow. Dominica is the habitat of Boa constrictors nebulosa, who grow up to 3 meters long and are widespread throughout the island. These Boa constrictors are called Tete Chien, because their heads resemble a dog's head. They are generally harmless but are widely feared and often killed by humans.

Read more about Dominica off the beaten path

Find more off the beaten path near: Delices