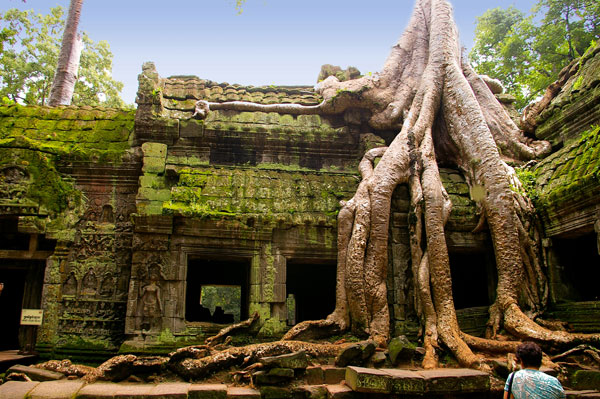 Ta Prohm is a beautiful temple, covered with massive roots of huge trees. It used to be a grandiose construction, consisting of a series of one-floor buildings. The temple complex covers a large area -  it was able to accommodate 12,640 people, including 18 high priests, 2,740 priests, 2,232 servants and 615 dancers. The remaining stone carvings of apsaras and the wall decorations let you imagine how it used to be.

The temple was built by Dzhayyavarman VII in the XII century and was dedicated it to his mother. Centuries later, the temple was abandoned.  And then the unstoppable, majestic and impressive jungle took over the temple's walls. The giant trees grew into the ceiling arches, framed entrances and windows, as if they wanted to compete in grandeur with the creation of the human hands, and, of course, they won.

The trees' roots and branches cover the temple so much that the structure can't be seen from afar. A similar thing happened with the nearby Angkor-Wat complex, however not to the same extent as with Ta-Prohm. Angkor-Wat was cleared from the trees' roots, but it was impossible to do this with this temple.

Ta Prohm was discovered by the French in the 19th century, and they decided not to restore the temple fully , because the trees fused with the ancient walls so much that they became one with the temple. If someone tried to cut the trees down, the structure would break down and disintegrate. The trees keep growing, and they would have already consumed the structure completely if humans were not interfering with nature's work. These remarkable trees towering over the walls of the temple are called Tetrameles nudiflora – they are huge, with a massive base, reminiscent of ancient redwood or oak trees. Their thick roots embrace and strangle the walls of the temple like a giant octopus.

Unlike many pyramidal temples,  Ta Prohm lays in the same plane and reminds a maze. To have a good look at it, you can go up the turret nearby. The patios of the structure are particularly attractive – when there are no tourists nearby, you can feel the unity with nature, look at the wall carvings, listen to the sound of the trees and sit in the shade under the massive trunks.

Ta Prohm is also famous for being the filming grounds for Lara Croft:Tomb Raider movie.

Read more about Cambodia off the beaten path