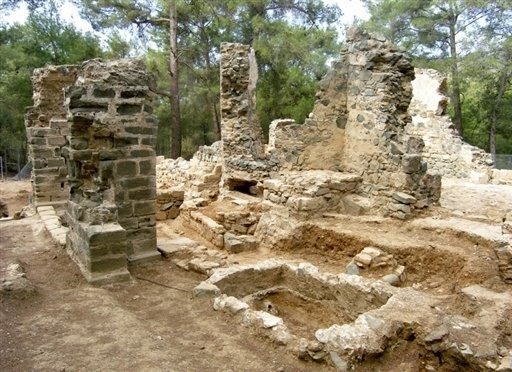 In 2008, an unexpected sex curse was discovered by archaeologists in Cyprus, in the ancient city-state of Amathus, located near the southern coast of Limassol.

The ancient city of Amathus was founded by the Phoenicians around 1500 BC and profited from grain and copper (many copper mines were found in the area). During the period of Roman rule Amathus was a regional center,  still flourishing in the VII century AD. People left the city in the XII century.

The curse is scribbled on a lead tablet in Greek.  A part of the text says "May your penis hurt when you make love ". The tablet also has a drawing of a man holding something resembling an hourglass in his right hand.

According to  historians, the texts written on lead were ritualistic utterances, which were deemed to be unalterable influence on life events once they were written. While the text was engraved, it was also uttered outloud, as part of ritual. Lead, in particular, was considered the proper material for curse inscriptions due to its color.

Pierre Aubuert, the head of Athens Archaeological School in Greece, analyzed the lead plate and concluded that the inscription dates back to the VII century AD, when Christianity had already become the dominant religion on the island. According to the French professor, the artifact suggests that pagan witchcraft and shamanism were still practiced in the kingdom of Amathus.

Read more about Cyprus off the beaten path