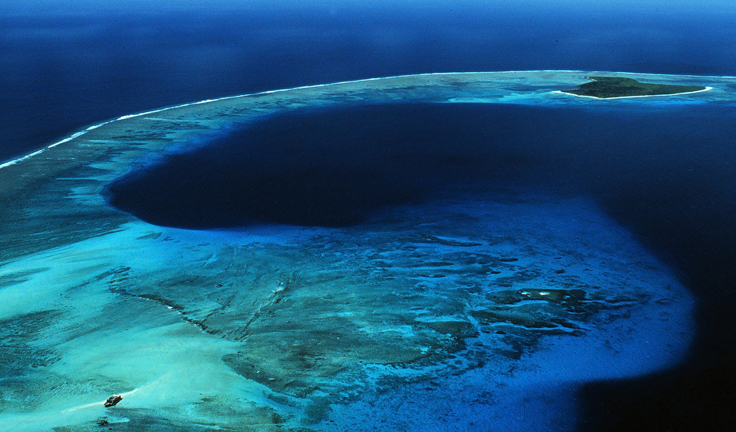 The name of the tiny bathing suit comes from this particular atoll - Bikini, part of the Republic of the Marshall Islands. Bikinis are part of the Ralik chain of islands, located halfway between Hawaii and Australia. Thirty-six Bikini islands are spread out  in the undulating oval shape, surrounding a lagoon area of slightly less than six hundred kilometers.

Despite the fancy name, and a beautiful scenery of the tropical forest, the atoll has suffered from nuclear bomb tests, which were carried out here by the US in the middle of the 20th century. The bombs were tested out under water or were aimed at the old unusable warships. Since 1946 and over the next 12 years, USA tested 23 nuclear bombs in the area. Not all the residents of the islands were evacuated during the tests, and many died from the radiation sickness. The ones who were evacuated by force, got affected as well and developed various diseases. The Japanese fishing boat crew that got contaminated during the first test were the beginning of the national scandal and an inspiration for the movie Godzilla.

At the bottom of the atoll's lagoon rests a large number of military vehicles, aircraft, submarines, battleships, which sunk during the WWII.  Divers can enjoy examining the famous US aircraft carrier Saratoga lying beneath the surface of the water, if it was safe enough to explore the location. Due to the nuclear tests fishermen and hunters stayed away from this area, which resulted in the richest underwater fauna. Bikini atoll is open to visitors on self-sufficient vessels. The diving program is limited to 11 visitors per week, and allows to stay on the island briefly. The US compensates the survivers and the former residents of the islands to this day, but they are afraid to go home again –  Bikini atoll remains an island that can only be seen from above, without being in danger of contamination.

Read more about Marshall Islands off the beaten path