The Black Castle of Halshany 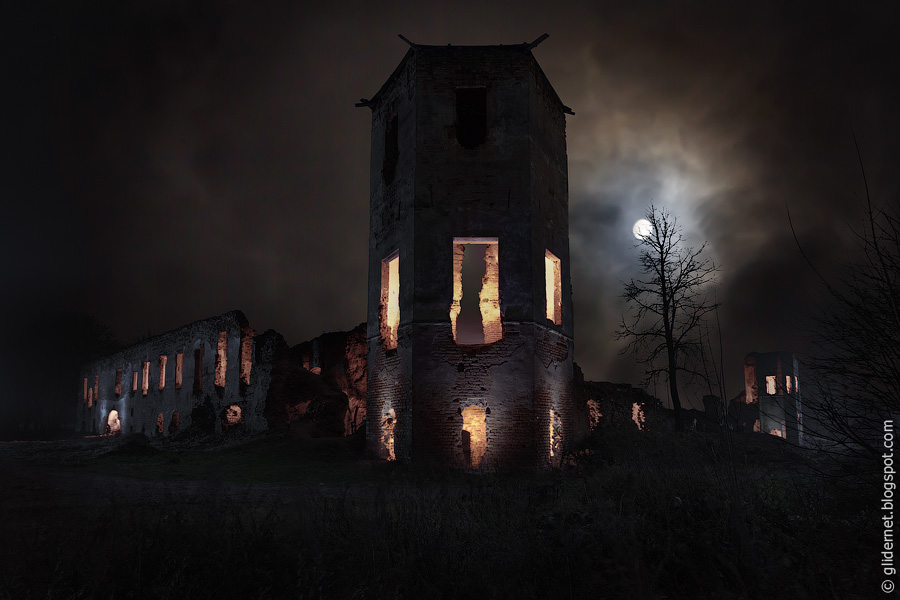 Halshany is the most mystical place in Belarus, located in Hrodna Voblast. There are enough bloodcurdling local legends about the Black Castle of Halshany for a full-fledged horror film, and there is no surprise that homegrown thrill seekers, various journalists, film crews, ghostbusters and paranormal experts frequent the place.

Halshany legends tell about cursed graveyards, enchanted grooms, underground palaces with treasure, a sunken city, a subterranean church and what not. The most famous are legends about the Black Monk and the White Mistress. The Black Monk legend tells of a castle owner's wife in love with a commoner, who would disguise himself as a monk to get access to the mistress' chambers. Eventually, the husband caught them in the act and ordered to wall the guy up  in the basement of one of the towers. This is how the legendary Black Monk's tale came to exist. When the moon is full, the Black Monk haunts the castle and those who see him become immobilized in a hallucinatory state, where the castle's walls melt and revolve around the petrified body of the spectator.

Another prominent story talks about the old Franciscan monastery in the vicinity the castle. When it was being built, one wall would repeatedly crack and collapse. On the advice of an evil sorceress, the workers sacrificed the wife who was first to show up in the morning to bring food to her husband by immuring her in the wall.  After that, their work went smoothly and the monastery was finished. Incidentally, in  1997, while cleaning the basement under the monastery, workers found a female skeleton in one of the walls. A few months later all of the workers died, the wall cracked again, and the ghost of the White Mistress appeared in the castle, causing lots of otherworldly ruckus and messing with whatever machinery located around the place.

As to the castle's documented history, it was built in 1610 to be the residence of the Sapieha magnate family and the seat of the one of the largest land estates in the Grand Duchy of Lithuania. It was the most elegant private chateau in the duchy. The owner, Paweł Stefan Sapieha, left no heirs, and, after his death, Halshany Castle passed from one owner to another.

Historical literature of the XIX century reports that the Black Castle was looted and damaged by the invading Swedes and during the Great Northern War in 1704. Since then, the castle has never been restored.  According to «Słownik geograficzny» from the second half of the XIX century, half of the castle still remained habitable, while the third floor was entirely destroyed, the tower was converted into a warehouse, a couple of rooms had traces of frescoes and the only original objects that survived were the portrait of one of Sapiehas and a marble table.

In1880, part of the castle was dismantled to build inns by the order of its new owner, Gorbanev. The Black Castle remained partially habitable until the Soviet era, when the castle bricks were used to build new houses in the village.  The remains of the castle still stand there, deteriorating with time and being destroyed even further by occasional vandalism. Due to lack of finances, Belarus is not able to restore this historical monument, however the Ministry of Culture is actively seeking sponsorship to preserve their heritage.

Every summer there is a Medieval festival in the vicinity of the castle, with sword fighting, mock knight tournaments, music concerts, roach races and more.

Gallery: The Black Castle of Halshany