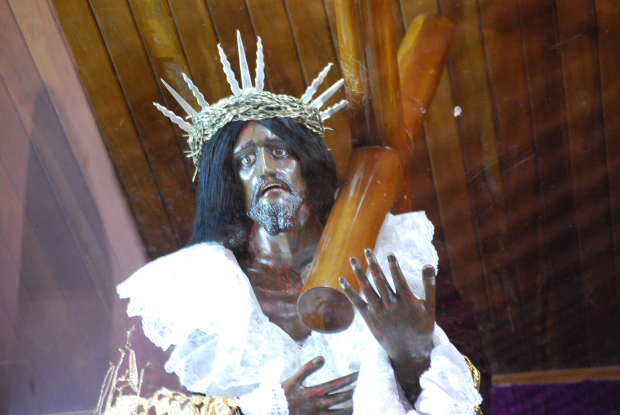 All of us have heard about the mystical places and religious shrines where many people allegedly received healing. In a small town of  Portobello, Panama, they have the miraculous Black Jesus. Every year, on the 21st of October, the Black Jesus is carried around Portobelo. Thousands of people from all over Panama come to attend this event - after all, besides having fun you might also receive a blessing. The festival itself starts around the second week of October and the 21st of the month is the event's very climax. All the locals dress in purple and maroon clothes to pay tribute to the Black Jesus, the most revered religious image in Panama.

Before carrying the statue out into the streets, the carriers shave their heads and put on purple clothes, and  then go through the streets barefoot. It is a great honor to be one of the carriers.  At midnight, they return the Black Jesus back to the church. The procession itself reminds more of a carnival, rather than a regular religious event, that is why the foreigners love it so much. Historians, anthropologists and artists also like to attend the event.

The statue of Black Jesus itself can be called unusual – the masters made it look very realistic.  It is unclear when Black Jesus arrived in Portobelo - some historians say that it was around 1658. Most scientists believe that this two-meter statue was carved in Spain, and later was brought to Panama, but the details of its arrival remain a mystery. The residents of Portobelo believe that Black Jesus came to Panama at the time of a plague epidemic, and his arrival made the disease suddenly retreat from Portobelo and take over areas. Rumors spread, and gradually, black slaves started gathering in Portobelo waiting for a miracle. For some it took three days to get to the place, and some, to show their repentance, crawled the last kilometers of the way on their knees.

Since then and until now, the poor and the sick pray before the statue of the Black Jesus in hopes of positive change in their lives. Some people pour hot candle wax on themselves as a sign of repentance, others bring with them huge wooden crosses. Besides the days of the festival, Black Jesus stays in the Iglesia de San Felipe on a podium next to the altar, which is decorated with gold. Around the altar there are exhibits of clothing donated by Panamanians for the Black Jesus, and some outfits are over 100 years old. Traditionally the clothes of the statue are changed twice a year, and each piece of clothing is used only once.

Gallery: The Black Jesus of Portobelo

Read more about Panama off the beaten path