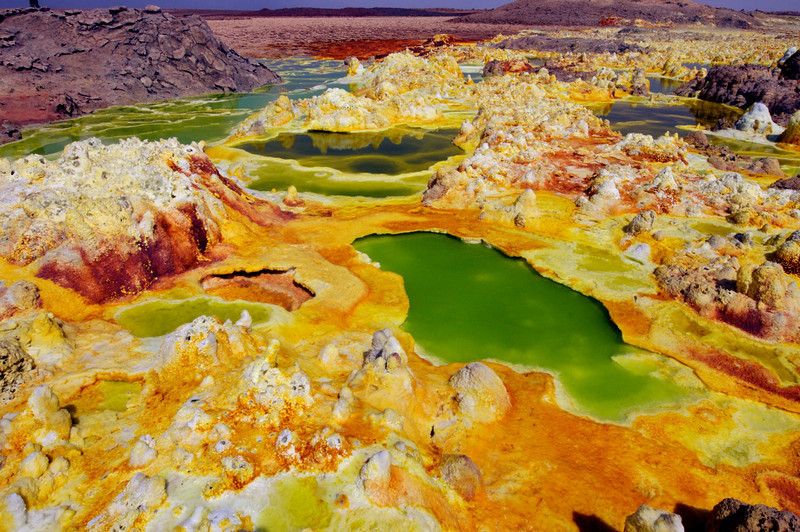 Danakil desert is a depression in the north of Ethiopia and to the south-west of Eritrea, which has the most unusual, cruel and toxic desert in the world.

Nature has placed many traps here like terrible volcanos, toxic gases, sulfur waters and merciless unbearable heat. The unique landscape of the desert, with its shimmering riot of colors resembles some distant fantastic planet. This strange place was discovered in 1928 by a traveler Tullio Pastori, who crossed more than 1300 km of the desert with his team, from the its western point to the salt pans.

Legend has it that a long time ago here was a green valley of unprecedented beauty. Once, a sorcerer of the valley summoned demons of four elements, who went out of control and killed the wizard. Each of these creatures of the underworld sought to possess this most beautiful and fertile spot of the world to terrorize and destroy all that inhabited it. Once released, the four demons were not able to decide who will be the king of the valley. To settle the dispute, they decided to fight each other in the valley with the forces of earth, water, fire, and air.

Each demon was so powerful that in a few days nothing was left of the beautiful land. According to this legend, all weird parts of Danakil are the reminders of this hellish battle.

The pearl of the desert is the eternally burning lava lake of the Erta Ale volcano. Its boiling lava splashes and freezes, cracking, breaking and sinking in huge chunks – a true diabolical spectacle.

Local volcano Dallol is amazing due to  its completely different view it's a low salt dome at the lowest point of Africa. Boiling sulfuric acid and gas painted it in the most incredible shades.

Lake Karum, which is also located in the desert, is one of the saltiest lakes in the world. Salt crystals have covered almost all the coast and sometimes people come here to collect salt and sell it in the city.

This place is inhabited by two tribes: Red Afar (Asaimara) and White Afar (Adoimara). Both tribes consider themselves to be masters of the desert, which often leads to armed conflict.

Gallery: The diabolical depression of Danakil

Read more about Ethiopia off the beaten path