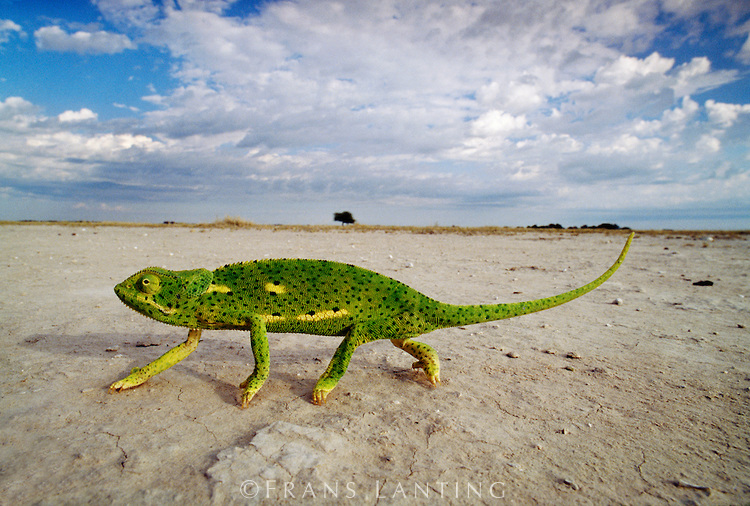 Makgadikgadi is one of the largest salt flats in the world, situated in the middle of the dry savanna of north-eastern Botswana, surrounded by the Kalahari desert. This vast complex of salt pans with sandy desert in between spreads over 30,000 square kilometers.  The largest lakes of the complex are lake Sowa and lake Nwetwe. Part of Makgadikgadi is reserved for the national park by the same name.

Makgadikgadi is, in fact, the remains of an ancient 30 meter deep lake, which used to cover an area of 200,000 square kilometers approximately 7-1,5 million years ago.  60,000 years ago, the landscape of the area resembled the modern delta of Okavango river. Back then, Makgadikgadi was covered with swamps, marshes and meadows.

The huge ancient lake was fed by the waters of Zambezi, Okavango and Cuando rivers. About 10,000 years ago, the rivers' flow changed due to tectonic activity, and the lake started drying up. Nowadays, the water  enters Makgadikgadi flats only once every few years, from Okavango marshes and via the shallow river Botletle. Therefore, the desertification of the area progresses at a fast pace. In the dry season,  Makgadikgadi is an inhospitable salty cracked desert, whose only life is a thin layer of blue-green algae and baobabs serving as local landmarks for explorers.

During the rainy season, which starts in November and ends in April, the dead and cracked surface of the salt pans transforms into a beautiful green valley. Botletle fills up with water and serves as a refuge to a great many waterfowl, especially flamingoes - so much so, that the area seems pink from afar. If you are lucky, you may catch a moment when all of the flamingoes take off at once. Besides flamingoes, there are many other birds, including several species of grouse and skylarks. The reserve also holds eagles, vultures, ostriches and bustards.

Makgadikgadi is home to many animals, and there are many fossilized bones of the ancient fauna as well. The animals that live in the area can only be seen at night – in the daytime they hide from the scorching sun. If you carry around a lantern, you can encounter mongoose, porcupines, various species of antelope, jackals and brown hyenas. Besides that, the pans are located on the seasonal migration route of thousands of zebras and wildebeest, followed by predators.

Excavations of the area indicated that Makgadikgadi was populated by ancient people about 200,000 years ago. This is evidenced by stone axes discovered by archaeologists.

The way to the National Park Makgadikgadi goes through Maun, where you can get by international or domestic flights, then to the village of Gweta, and then 8 kilometers more to Makgadikgadi. Visitors can stay in the huts among the mighty baobabs.