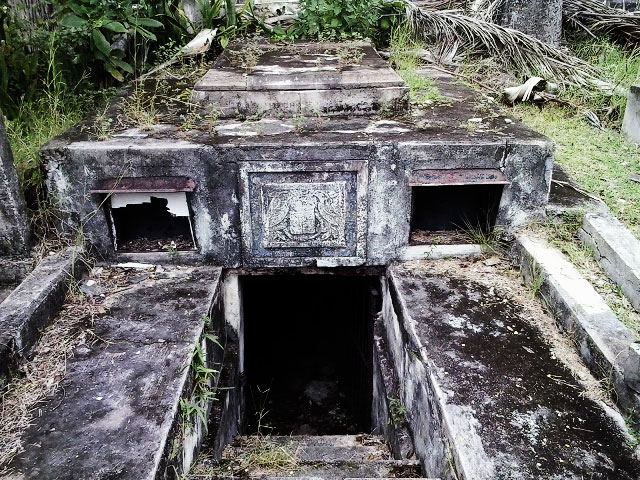 Although the idea of the afterlife has been popular since the dawn of man, there are many disagreements among various social groups on what happens after you die, so the afterlife world remains something that is unknown to a living being.  Naturally, when a person is faced for the first time with an unknown situation, he experiences fear and anxiety. One of the phenomena that can be associated with the existence of the afterlife, is the spontaneous movement of coffins in one of the vaults on the island of Barbados.

The vault, built by the Honorable James Elliot, was made of carved stone, coral and thick concrete walls. The tomb was sealed by a large slab of  blue marble. James Elliot's wife became the first occupant of the vault in 1792. Later, the vault was purchased by the family of plantation masters, the Walronds. When the vault was opened to receive the body of Mrs. Thomasina Goddard, a relative of the family, the coffin with James Elliot's wife Elizabeth had disappeared. The locals immediately assumed that Elizabeth Elliot was a vampire.

Later the vault became the property of another English family, whose head was Thomas Chase. He was a wealthy Englishman, had a family and slaves, who he systematically tortured and abused, and was not a nice fellow. In the same year, his younger daughter passed away and was put into the vault, and four years later his eldest daughter was buried as well. Heartbroken, Thomas Chase died a month later, and when the vault was opened to receive his body, the coffins of the daughters were in a disrupted state – they stood upright, while there was no sign of a forced entry into the vault. Besides that, Chase's daughters were buried in marble coffins, and it would take many men to be able to move them.

The daughters' coffins were returned to a horizontal position and Thomas Chase's coffin was put between them.  Four years later, the vault was opened again to bury a close relative of the Chase family. Not surprisingly,  the coffins were in disarray once again -  the coffin of the head of the family stood upright leaning against the wall. The suspicion fell on the slaves that worked at the plantation, as everyone believed that they were taking revenge on their former owner, for he treated them horribly. The slaves were punished, without second thoughts on the fact that the massive marble door of the vault had no signs of being opened.

The rumors of these mysterious events spread quickly all over the district, and when the next member of the Chase family was about to be deposited into the vault,a huge number of curious locals gathered to see the procession. They were not left disappointed – upon opening the vault all the coffins were found standing upright yet again. Then, the Governor of Barbados  decided to take this sinister crypt under his control, and  was personally present when all the coffins were rearranged to their original position. The Governor ordered to seal the vault door with mortar, and he imprinted his own seal within – that way, it would be easy to tell if anyone tried to tamper with the vault.

A year later, the governor was asked to have a look at the vault again, since the locals complained about hearing strange sounds coming out of the vault. When the vault was opened, the coffins were, of course, standing upright. Only the wooden coffin of Thomasina Goddard always remained in its place, although the wood had deteriorated significantly.

The experts in the field of the paranormal suggested that it was the supernatural forces that moved the coffins in protest because the marble doesn't allow the bodies of the deceased to decompose and enter the better world. It was decided to re-bury the bodies in a different location, and since then, the Chase vault remains empty to this day, and the mystery behind the vault is still unresolved. Many theories have been put forward, including flooding, earthquakes, magnetism, but due to the lack of scientific data from the past centuries, it is impossible to come to any conclusion.

Gallery: The Chase vault mystery of the moving coffins in Barbados

Read more about Barbados off the beaten path

Find more off the beaten path near: St. Thomas