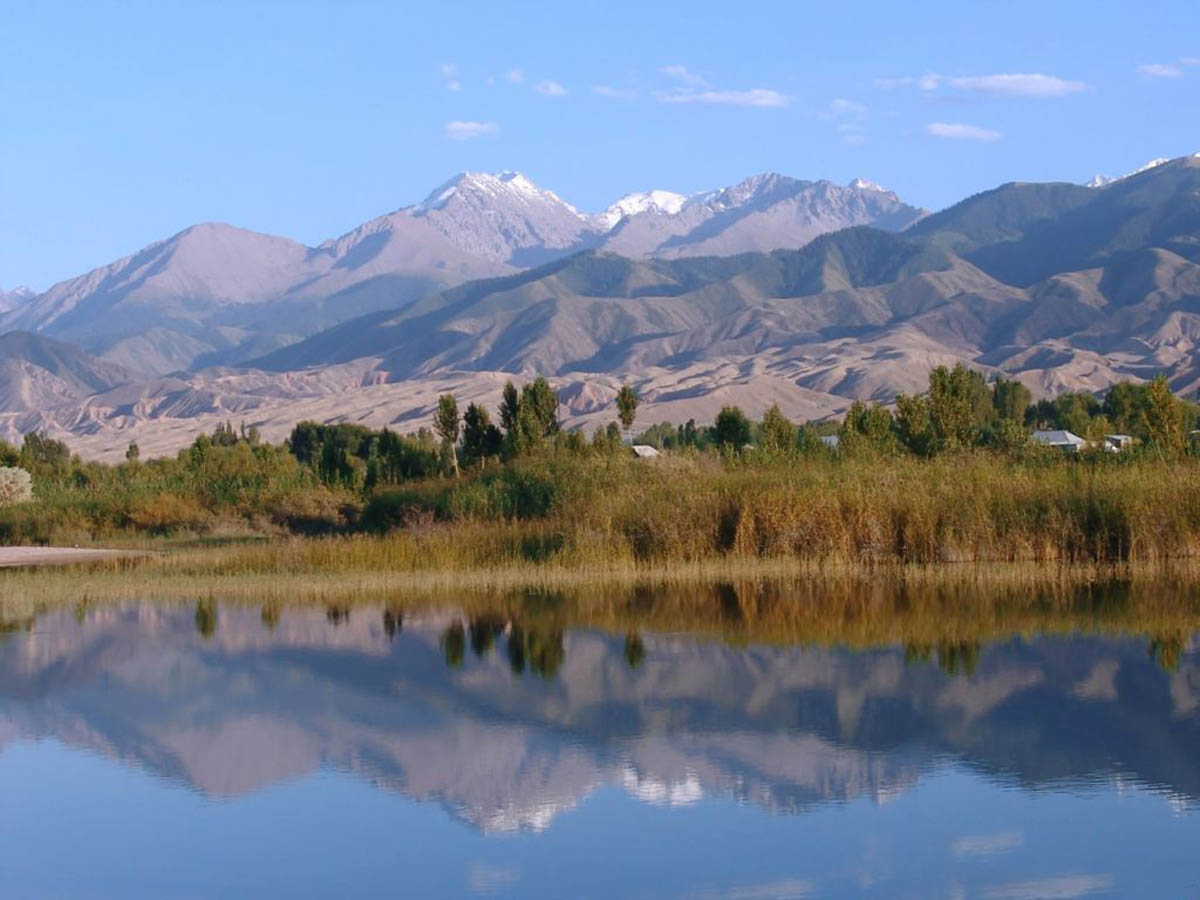 Issyk Kul is the biggest and cleanest lake in Kyrgyzstan, the tenth largest and the seventh deepest lake in the world.  Besides being famous for its size, depth, storms and beautiful nature, the lake hides many unsolved mysteries beneath the water and has various legends connected to it.

One of the legends about the lake's formation reads that long ago, there was an ancient city in the place of the lake, ruled by a mighty old khan, whose cunning and greediness knew no bounds. The khan heard that there was a maiden of celesital beauty in a poor nomad's family, and decided to get her at any cost. He sent messengers with gifts to the maiden,  but she said: "My heart belongs to another, and I will not be anyone's wife but his". When the messengers delivered her response to the cruel ruler, he was furious and ordered his servants to capture her and get  her to the palace. Neither luxury nor the musicians nor the khan's offerings could win the girl's heart. When the khan decided to take her by force, she preferred death and threw herself out of the dungeon's window. Right after that, the earth started to rumble and the castle began to collapse. The water from the mountains rushed down to the valley where the khan's palace was and overwhelmed it in full.

According to the locals, if you take a boat to the middle of the lake at night, you can hear a woman crying.
As to the submerged khan's palace, there are, indeed, ruins of a monastery under the waters of the lake, however it is not known why and by whom it was destroyed, since this territory had Shinto, Islam, Christian and Buddist religions. Besides that, Issyk Kul has been a place of treasure hunting since the early 20th century, because during the storms on the lake, various silver utensils and ornaments were washed ashore, and in the last century people would come across shards of jars with preserved ornament in the sand.

According to the history of the place and its location on the Great Silk Road in the Middle Ages, there may be up to 200 large and small treasures. The most popular treasure hunting legends include a legend of “golden trail” left by people scared by the revolution – one of the containers with the treasures was broken and the treasure was falling out of it along the trail. A similar story is that the same happened with the people who were trying to escape Stalin's repressions. Another one is based on the rumors about the treasuries of Baron Ungern von Sternberg – the head of White Guard, which are hidden in the waters.

According to Kyrgyz historians and archaeologists, the sons of Genghis Khan faked his funeral in Ordos, while secretly sending his body along with his treasures to Issyk Kul in a rugged mountain echidna coffin. Yet another version of the origins of the treasures states that in 1218, escaping the army of Genghis Khan, a caravan with christian monks and their treasures found an Armenian monastery along the way and the Armenian monks helped them hide the treasures in the lake waters and in a cave nearby, which was later flooded.

The christian take on the treasure story is that on the northern shore of the lake there is a place called “Bright Cape”, which used to be the location of an orthodox monastery. Supposedly, it holds the lost relics of St.Matthew.

By the evidence of ancient Arab chronicles, this is where Temirlan's palace used to be, and it stored all the treasures of Timur the conqueror. The palace was built on one of Issyk Kul islands but after Timur's death the island went under the waters with all its treasures.

Issyk Kul is of great interest for archaeologists who hope to find an answer to its secret, and for the common travelers as well, especially for the diving enthusiasts.