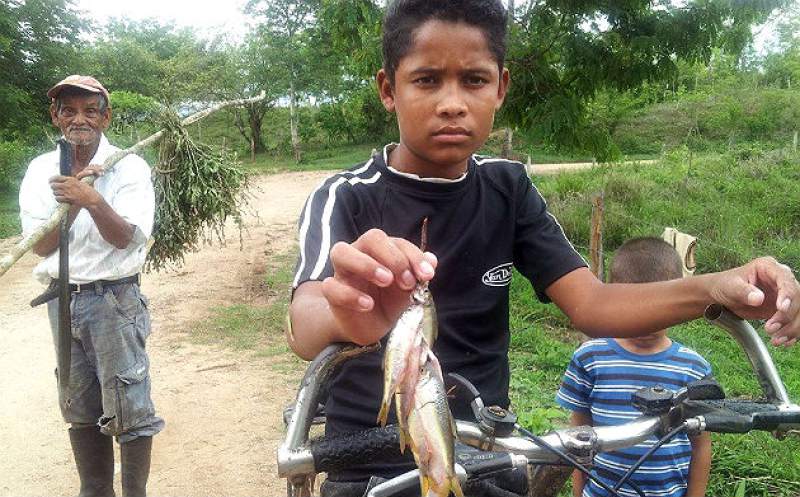 Nature likes to surprise people - as we know, there are many unexplicable weather events, and, perhaps, the most mysterious one is rain of fish, which is a rare phenomenon. However, in Honduras, it rains fish at least once a year.  The locals have long been accustomed to it, but visitors do not cease to be surprised when they see fish flapping in the puddles of rainwater.

The phenomenon of fish rain is known to mankind for a long time - since the days of the ancient Greece. While scientists are atill not completely sure how to explain this phenomenon, residents of the fish rain areas invent their own versions.

Near the city of Yoro, the capital of the eponymous Honduran department, fish rains are being reported every year. It occurs during the rainy season, which lasts from May to July, and starts It all starts with a huge dark storm cloud looming over the city. After forty-five minutes of heavy rain, accompanied by bright flashes of lightning, frequent deafening thunder and strong wind, all puddles in the district get filled with live fish. Accustomed to these events, locals run out into the street with baskets in their hands. The largest number of fish falls into the marshy meadows at the foot of an extinct volcano El Mal Nombre – that's where most of the people run frenetically to collect fish, even though there is always enough fish for everyone. People collect all of the fallen fish and keep it in shallow pools filled with rain water. Interestingly, those who have tried the fish, say that it tastes different.

No one knows how and when this started happening in Honduras. However, the  fish rain tales are  found in the folklore of the indigenous population. Since the beginning of the 18th century, the phenomenon was documented by Christian missionaries working in the area. In addition, the famous explorer and scientist Alexander von Humboldt in 1823, wrote about the eruption of Carihuairazo , which occurred in 1698, accompanied by an extraordinary rainfall, covering 70 square kilometers of the neigborhood with fish, mud and volcanic ash.

Religious people of Honduras have their own interpretation of this phenomenon. The fish rain is associated with the name of the priest Jose Manuel Subirana, who played a significant role in the development of Christianity in Honduras. According to a legend, he often saw the suffering and hunger among the Indian tribes he worked with, and was praying incessantly for their health. Eventually, a dark cloud appeared over Yoro, bringing the rain of fish with it. Since then, the miracle happens every year.

Scientists, as a rule, are very likely to doubt the divine intervention, so one of the plausible explanations to date is that fish from the sea gets sucked into a cloud by a strong tornado, and then it is brought over to Yoro with the wind, causing fish to fall down to the ground. However there are no documented tornados during May-July near Honduras, plus the tornados must always occur in the places with big clusters of fish, and be quite gentle with carrying the fish over to Yoro, otherwise, the fallen fish would be found dead and not flapping about in the puddles. Besides that, the fish would also be found on the roofs of buildings and everywhere else, which is not the case.

Another hypothesis draws a parallel to underground caves with fish – the water level falls and fish ends up in the caves, brought there by the water going down. By the end of the drought in Honduras the water level drops and the silvery river dwellers are forced to seek a new home. When the rainy season comes, the caves become flooded, and the water flows into the valleys, bringing the fish with it. However, there are controversies about this theory as well. Firstly, while Honduras is very rich in caves, most of which are unexplored, hardly any of them, especially the caves near Yoro, can accommodate thousands of fish. Second, to survive in the caves for at least a few months, the fish must have a unique vision.
Another explanation for the fish rain is that packs of fish migrate from the Caribbean into the rivers, and floods wash the fish down to the valleys. However, the migration routes of marine fish in Honduras go only through the rivers that are close to the coast.

Some believe that the fish in the puddles appear because of the birds. But how many birds whould you need to carry over massive quantities of fish?

In the meantime, while the scientific world are scratching their heads over the phenomenon of fish rain, the residents Yoro rejoice in constant fish supply. Since 1998, the fish rain is celebrated with a festival, bringing together thirty thousand people dancing in the streets, lighting fireworks and singing. The festival fair sells all kinds of fish refreshments and fish-related arts and crafts, and the religious community praises Jose Manuel Subirana.

Gallery: The perennial Rain of Fish in Yoro