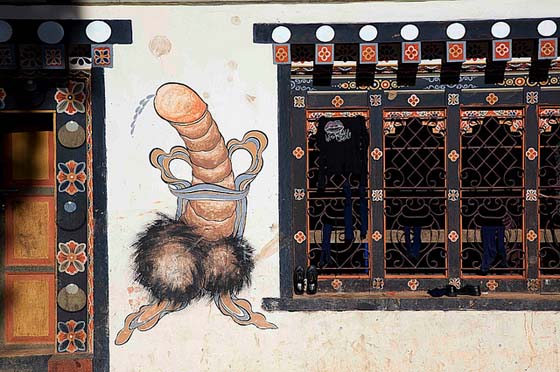 Bhutan, the land of the Thunder Dragon in the Himalayas, is not only famous for its amazing mountain views and its temples. If you drive off from Paro airport towards Thimphu, the capital, you will immediately be surrounded by the multitude of phalluses of all forms and shapes, fighting for the place under the sun amongst the oriental dragons and tabloids with Bollywood actresses advertising soft drinks –  drawn on the walls of the buildings, serving as furniture, decoration and what not.

As many may know, phallus is a rather friendly component of Eastern religions - in India and Nepal, Lingam serves as a symbol of Lord Shiva's worship. In Bhutan, however, there is a different phallus-related story. The images of the male reproductive organ originate from the Buddhist monastery Chimi Lhakhang near Punakha, the former capital of the country. 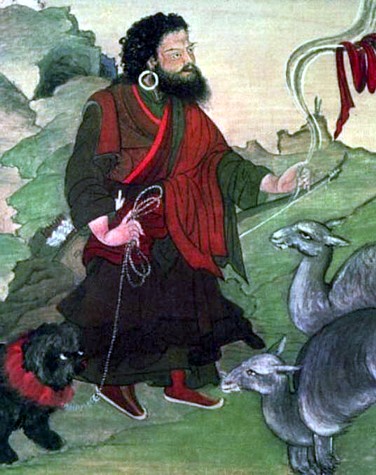 The phallus was an integral part of  Bön religion and rituals, which existed before Buddhism became the state religion in Bhutan. Nowadays, the phallus images are traditionally used to scare away evil spirits from the Bhutanese houses. The Holy Madman of the Dragon Lineage, Drukpa Kunley, was the one who propagated the tradition.  Drukpa Kunley came from Kagyu, or Red Hat Sect dugpas' lineage, and became known for his blasphemous and unorthodox ways of teaching. He was very fond of having sex with women, deflowering virgins and drinking wine, and his intentions were to shock the clergy as much as possible.  According to a legend, he used his phallus to fight demons and desecration of religious institutions. He would seek out wayward demons and beat them  into submission with his penis, and subdue the evil demonesses with his “magic thunderbolt of wisdom”. With his tantric teachings, he took females and his disciples along the path of sexual desire to awaken their divine nature and dissolve their hypocrisy.

Chimi Lahakhang monastery was built in the mad saint's honor, and houses several wooden phalluses, including a silver handled one – the Lama's Thunderbolt, which is frequently used even now to hit women on the head, as a blessing to become fertile.

There are several books that Drukpa Kunley wrote, however only one book is translated from Tibetan – The Divine Madman, and serves as the most potent teaching of tantra to date.

Despite the long and legendary history of the phallic symbol in Bhutan, the majority of the Bhutanese regard it as a symbol for attracting luck. Among some communities, there is a special day for the phallus worship – they are worshipped with flowers, red ara (alcoholic liquor) and milk. In the other parts of Bhutan, wooden phalluses are put inside the cups before offering drinks to the guests. The phallus paintings on the houses and vehicles are happy and artistic, and some of the phalluses have friendly faces and eyes. Most often, the phalluses are drawn ejaculating. Bhutanese folk like to hang wooden phalluses outside of their homes, make phallus-shaped doorhandles and other pieces of furniture, set them up in the fields and decorate their clothes with them. There is virtually no home, shop or eatery that is not decorated with a phallus.

Phalluses are also believed to prevent quarrels among the family members and couples. When a new house is built, the house warming ceremony requires to erect phallus symbols at the four corners of the house and one inside the house. The ceremony is performed by lifting a basket filled with phalluses to the roof of the house and fixing them there. These activities are accompanied with joyful phallic songs and dance.

Recently, the penis worship was reported to be on the rise – Bhutanese government pays close attention to preserving traditions and culture. The modern Bhutanese filmmaker, Tashi Gyeltshen, announced that soon he will be exploring the idea of phallus in his next film, “The Red Phallus.”

Gallery: The Phallus worship in Bhutan

Read more about Bhutan off the beaten path

Find more off the beaten path near: Gangkhar Puensum Paro