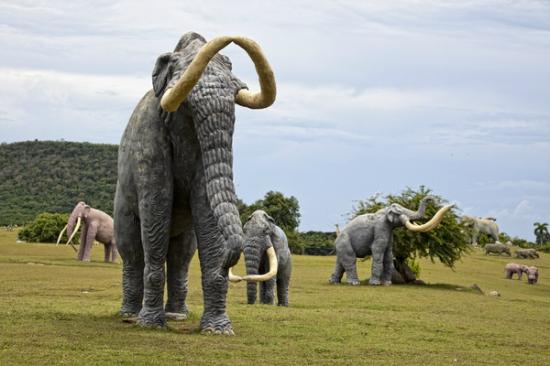 National Park Baconao is, perhaps, the most unusual place in all of Cuba and the most original theme park in the country. Declared by UNESCO a biosphere reserve, the park stretches 50 km between the Caribbean Sea and the Sierra Maestra mountains, just 20 km away from the city of Santiago de Cuba.

Although the park was intended mainly to portray Cuba's history and culture, it  became famous primarily for its Prehistoric valley, the Meadow of sculptures and Laguna Baconao. More than 200 pieces of full-size prehistoric animals since the Stone Age are spread around on 11 acre area - dinosaurs, mammoths, ancient tribesmen. These were constructed by inmates from the prison in the vicinity of the park. The area around the salty lake Laguna Baconao features a village of Taino, the pre-Colombian inhabitants of the place, where you can have a drink and relax at the beach nearby.

Besides the odd prehistoric area located in the park, there are various specimens of fern, orchids, cacti and eucalypts, many species of birds, architectural and historical monuments, a transport museum and a museum of national heritage. Still, the main focus of the park is the Cuban revolution – a small farm on the premises is the place where Fidel Castro and his companions planned their actions.

Read more about Cuba off the beaten path