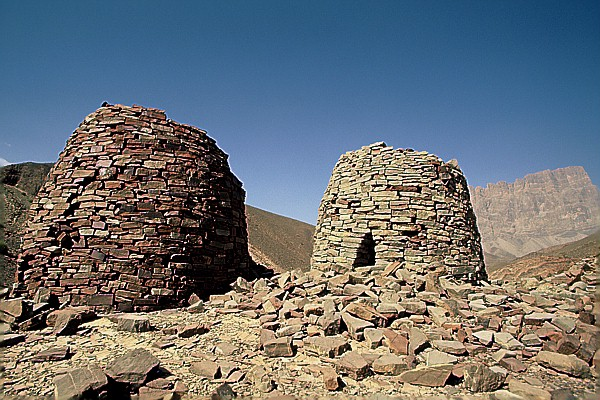 The tombs of Bat are located 30 kilometers east of Ibri , and is considered to be one the most important  archaeological sites in Oman. The area seems to have been continuously inhabited for over 4000 years. Here, in 1972, a Danish archaeological team  discovered a whole cluster of houses and a necropolis, which form the most complete collection of protohistoric settlements and necropolises in the world.

The necropolis itself has two distinct areas. One area contains the tombs of the end of the 4th millennium BC, which was often used for the new burials, and the other area extends to the river terraces of Wadi Al-Kheir and includes hundreds of drystone tombs that look like beehives. The oldest of them have a single entrance door to the mass burial chamber, and the later ones have two doors and two to four burial chambers inside. The area has more than 100 tombs, and not much is known about the culture that constructed them.

In the settlement zone, there are five towers, one of which has been fully excavated and it has been determined that it was built between 2595 and 2465 BC. In the area surrounded by the towers, there are rectangular houses with central courts. The settlement along with the other tombs have not been completely excavated yet, and are an obvious interest for the archaeologists.

To get to the place by car take Route 9 from Ibri, and turn right near Manjurin (15-17 km from Ibri).

Read more about Oman off the beaten path

Find more off the beaten path near: Ibri Muscat