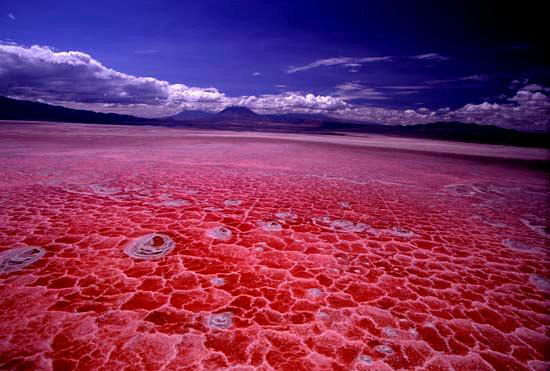 Lake Natron in Tanzania contains a mixture of salts and minerals that promote petrification of the animals that pass away in its vicinity. The lake is situated in one of the most active volcanic zones of the planet,which is constantly in motion, in the region of the Great Rift Valley, north east of the Ngorongoro crater.  The Great Rift Valley is one of the most hostile  and environmentally extreme areas on Earth. The shamans of the Maasai tribe call Lake Natron a cloth created by the gods who dwell in the sacred volcano Ol Doinyo Lengai (“Mountain of God”) , which is right next to the lake.

Because of the salt-loving microorganisms and algae living in the lake, its water has a blood red tint, which serves as a subtle warning to all living things invading the lake's domain. Closer to the shores the color of the water turns bright orange, as the concentration of bacteria there is much lower. There are only a few places on the lake where the water has its natural color. The water also reaches hellish temperatures and can be compared to ammonia.

The evaporation of the lake helps deter large predators, and it serves as a refuge for a variety of small animals and a huge number of birds. Similar to the Laguna del Diamante in Argentina and other volcanic lakes, flamingos like to roost there. They live, breed and die at the lake, but their bodies do not decompose – they turn into stone. The alkaline water in Lake Natron has a very high pH because of the sodium carbonate and other minerals that flow into the lake from the hills. Sodium carbonate, or lime, is what the ancient Egyptians used to mummify their people.

The consequences of this rare chemical phenomena of the Lake Natron were documented by a photographer and writer Nick Brandt in his book  Across the Ravaged Land. The author took various photographs of this abnormal reservoir's victims, found on its shores.  He positioned various creatures in the way that made them seem alive, which gave his work a very somber mood, and shot the scenes in black and white, accentuating the transience of life.

You can visit the lake by joining a safari or you can drive, which takes around three hours from Mto wa Mbu.

Read more about Tanzania off the beaten path