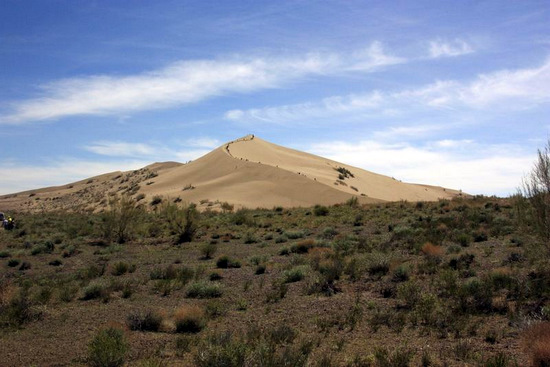 The Singing Mountain in Kazakhstan is a huge sand dune, which is more than three kilometers long and about two hundred meters high. It formed on the bank of the river Ili. It is located in the National Park Altyn-Emel in Almaty oblast of Kazakhstan, 182 km north-east of Almaty.

The Singing Mountain is considered to be one of  the most mystical places in Kazakhstan. At times, one can hear a deep drone-like vibrating sound coming out of it, similar to the hum of a jet engine. This sound can be heard at a distance of several kilometers, and over time it amplifies, causing the ground to vibrate around it.

To this day it is unclear when and how this mount formed in the middle of the steppe. Some scientists believe that the hill was formed by the wind, accumulating the sand from the valley of the river. Locals claim that this dune moves around in the steppe, although this hasn't been proven scientifically. The local old-timers believe in the legend that the dune is the burial place that holds Genghis Khan remains.

Others religious Kazakhs claim that under the hill is the hiding place of Shaitan (kazakh Satan), where he tried to escape from God's wrath and was not able to get out. Therefore, he howls every night, angrily twitching his tail. Indeed, the southern side of the hill looks flatter and resembles a tail. This part of the dune changes its position depending on which direction the wind is blowing.

Singing dues is a natural phenomenon – when the humidity is at a certain level, the sand dune will emit a drone-like sound. This can happen to the type of sand dunes that contain silica and their sand grains are round. There are various theories about the singing mechanism of the dunes.

All slopes of the mountain are covered by the characteristic shrubbery of Kazakhstan, saxaul, but besides this plant, nothing else lives there. If you take a chance and go to the upper ridge of the dune, you can hear it singing.

Gallery: The Singing Mountain in Kazakhstan