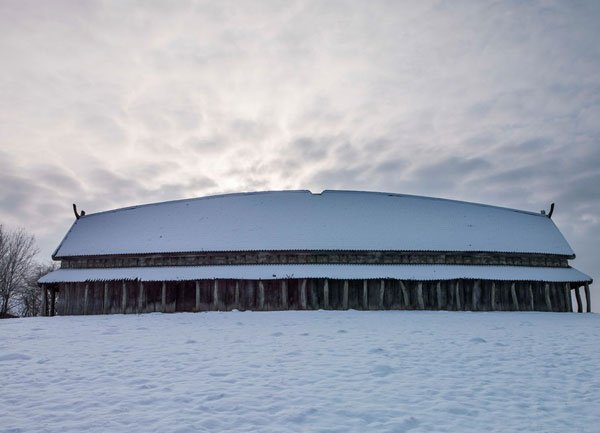 Trelleborg, the Viking stronghold in Zealand, was built in the 10th century by Harald Bluetooth, who acquired his name for his love of blueberries. In the height of the Trelleborg 's power, the fortress housed about 1000 soldiers. Out of the number of Trelleborg's restored buildings  the most impressive  is the "long building", built out of oak logs with lots of benches on which the Vikings once slept.

Initially, the main part of the fortress consisted of 16 buildings. Beyond the walls of the fortress there was a small cemetery, where archaeologists found 150 graves. The fortress is 180 meters in diameter with a 17 meter wide wall, and it allegedly used almost half of the available oak timber in Zealand.

In July the annual Viking fair takes place in Trelleborg, and  the visitors have an opportunity to  see an authentic Viking market and take part in various games. You can see the reenactment of the battle between the army of King Harald Bluetooth and his son. The visitors also get an opportunity to make their own bows and put on Vikings clothes.

There is also a museum of Viking culture, which displays  pottery and jewelry found during the excavations,  and a Viking village, which lets the visitors imagine how the life was back then.  You can also watch a film about Trelleborg's history in the museum.

Read more about Denmark off the beaten path