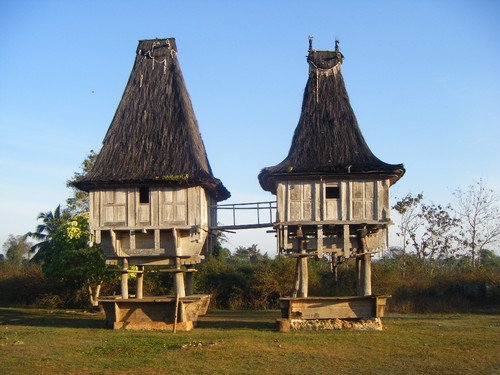 Uma luliks are sacred animist totem houses in East Timor, made out of natural materials like timber, bamboo, wooden planks, twine and rope made out of the native palm called arenga pinnata. Besides being just a construction, the concept of uma lulik includes rituals, ceremonies and beliefs – these were the houses where the living could communicate with their ancestors. The word itself, Lulik, refers to the spiritual cosmos, root of life and sacred rules that dictate relationships between people and nature.

These houses were constructed by traditional architects, who possessed the knowledge of rituals to be performed while building these constructions. They knew the intricate details of the building materials – which grass had to be used for the house's roof, what wood to use for making posts and planks, what to use to tie the parts together. All the materials had to be natural in order to tie the house with the intangible forces of nature.

The front custodians of the houses – lia-na'in, lulik-na'in or makoan – were the inner circle specialists who related the houses to the myths and legends of East Timor. Each house had a particular meaning to it, for example, uma biru was a house where warriors received their protective amulets, uma adora – places of worship, and so forth. The symbolism of Lulik is quite elaborate, with the main elements being Lulik, feminine and  masculine elements. The houses were built considering these three areas and were decorated accordingly.

Due to historic events and social changes, most of the traditional knowledge on uma lulik has been lost. Besides that, this sacred knowledge was never passed down to ordinary people, and if you were to inquire about the sacred uma lulik from a local, you would at best hear a part of the story about them. The locals are usually unwilling to discuss anything regarding Lulik, since they were led to believe that it is a negative animist magic. Because of this, anything Lulik-related remains unexplored, however it seems that Lulik still dictates the lives of the inhabitants of the rural areas of East Timor. They believe that if a person breaks Lulik's rules, he will be punished in this life.

You can see the elements of Lulik on the rooftops around Timor Leste – the buffalo horns, pigeons and stars, usually in black, green and white colors. It is assumed that the star and the white color represents the Lulik itself, the divine entity, and the spirits of ancestors; the pigeons and the green color represent Dato, the feminine element of fertility , authority, peace and prosperity; the buffalo horns and the black color represent Liurai, the male element of strength, security and protection. Many Uma lulik's are being rebuild across the country after its independence, which will help revive the traditional heritage and learn more about this obscure religion of the Timorese.

Read more about East Timor off the beaten path