Boga lake - the lake of the fiery dragon in Bandarban, Bangladesh 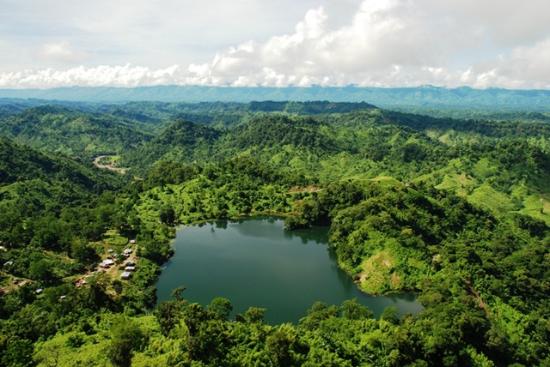 Boga lake is situated in Bandarban  - the most remote and the least populated district in the Bangladesh.  This area, full of lush greenery, combined hills, rocks, cliffs, zigzag pathways, sweetwater streams and mountain landscapes. The three highest peaks of the country are located there as well. Boga lake is lake is also known as Bagakain Lake or Baga Lake, or the Lake of Mystery.

The lake area is believed to be a 2000 years old place of dwelling of the ancient gods of the local  Khumi tribe.  According to the local stories,  one of the gods went mad and first ate all the tribesmen, and then reappeared in a form of a dragon, causing a massive earthquake, and thus creating the lake in the spot where the poor villagers lived. The name, “Boga”, derived from “baga”, which means “fiery dragon”. Since then, although there was never an obvious external supply to the lake, it never dried up.
Every spring, the crystal clear waters of the lake become muddy and change color, which feeds the imagination of the locals and fuels the flames of the supernatural stories about it.

Boga lake is 67km from Bandarban and 20km from Ruma Thana. Its total area is about 15 acres, and the lake is about 900m above sea level. Besides enjoying the magical landscape of the lake with its pristine waters, changing its color depending on the season, humidity levels and sunlight, surrounded by the three majestic mountain peaks, massive rocks and bamboo bush, you can explore and learn about the Bawm, Tripura and Khumi tribal communities nearby.

This place is ideal for nature lovers – you can stay in the guest houses in the vicinity, camp out, watch the stars and discuss the fiery dragons. Be prepared to share washrooms with other nature freaks. Trekking is another activity in the district, offering you all the wilderness and pure beauty of Bandarban you can take. An English speaking guide is not easy to find, however.

To get to Boga Lake you will need to arrive at Bandarban from Dhaka by bus. Next, head towards Ruma Ghat. Cross the Sangu River by boat and in 30 minutes you will be in Ramu Bazar where you must hire a guide and get registered at the military check point. Usually they register your tourist name and the guide’s name, and some other additional information. Boga Lake can only be reached by foot. Get ready for a 5-7 hour hike. It is advisable to pack your backpack thoughtfully. You will need water, medicine, and extra clothes.

Gallery: Boga lake - the lake of the fiery dragon in Bandarban

Read more about off the beaten path

The mystery of Síle na Gig