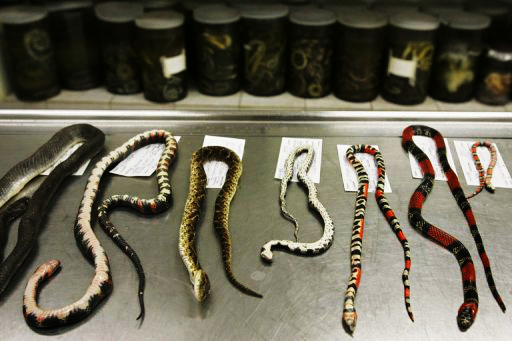 Butantã - the Institute for Biological Studies is internationally renowned for its studies of venomous animals and usefulness of the venom for curing diseases. The institute was founded in 1901 by the physician Vital Brazil, and in a little more than a century it became one of the world's leading centers for the production of serums and vaccines against infectious diseases. It is situated on the campus of the University of Sao Paulo.

The Institute became one of the most popular places to visit because of its serpentarium, which contains one of the largest collections of exotic poisonous snakes, lizards, insects and scorpions in the world. The visitors can watch the reptiles and the insects of various shapes and colors in the cages as well as in open air pits.

Close to the serpentarium, there is also the Museum of Microbiology, which lets you see the smallest members of the family of venomous organisms under the microscope. Children are particularly interested in the interactive displays installed at the Museum.

By extracting the reptiles and insects' poison, the research and production center of the Institute develops vaccines against many diseases, which include tuberculosis, rabies, tetanus and diphtheria. The center also produces antidotes to the bites of poisonous animals. Just in 2001, the institute produced about 110,000,000 vaccine doses and 300,000 vials of hyperimmune serums. The Butantã institute is responsible for producing 90 percent of the vaccines used throughout the country. You can visit the History museum within the institute to find out more about the history of the research.

There is also a 24-hour working hospital nearby, which will treat you if you were bitten by a poisonous creature.

Besides watching the reptiles and exploring the Museum of Microbiology, you can also walk around in the beautiful park, where the museums are situated.

On May 15, 2010, a fire almost burned down the laboratory and destroyed the Institute's 85,000 snake specimens preserved in formaldehyde or ethanol and 450,000–500,000 specimens of scorpions and spiders. Over 90 years of research were lost. None of the people or live animals were harmed in the fire.