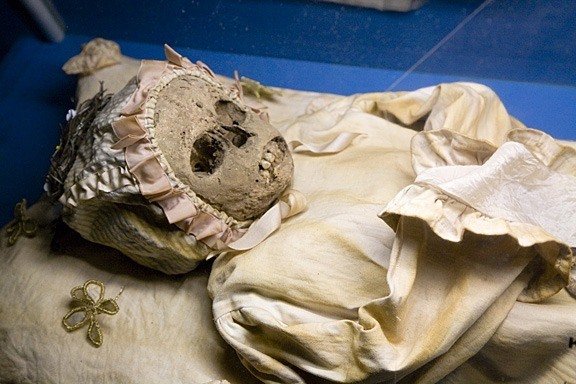 The town of Vác is situated on the left bank of the Danube, forty kilometers north of Budapest. A Dominican church, built between 1699 and 1770 - a simple but richly decorated baroque cathedral, dominates the southern part of the town's main square. During the renovation of the church in 1994, remains of 265 people were found in the underground tombs – a real underground necropolis of mummified citizens, who have been resting there for almost 200 years. 18 of them are exhibited in the Budapest Hungarian Museum of Natural Sciences.

In the period from 1731 to 1838 Vác citizens used the cathedral's underground vaulted room for burials. Back then, the relatives of the deceased were allowed to say good byes to their loved ones inside the church, and the coffins were taken to the crypt by the church workers.  Despite the fact that Josef II banned burials in vaults for hygienic reasons, the citizens of Vác violated the ban until 1838.  Later, the crypts were walled up with bricks. When the families of the ones buried in the crypts died out, this underground cemetery was forgotten.  When it was rediscovered in 1994, Vác mummies became a huge funerary relic sensation of the 18th century.

Vác mummies' only competitors in Hungary are  the Egyptian mummy collection in the Budapest Museum of Fine Arts, the Hungarian mummy of the archbishop of 18th century in the family crypt of  “the greatest Hungarian István Széchenyi in Nagycenk, or the mummified right hand of the first Hungarian king St.Stephen – a Szent Jobb -  in the Budapest Cathedral of St.Stephen.

The mummification process of the bodies was not intentional – they got preserved naturally due to the specific microclimate in the crypt. The temperature of the burial vaults was always between 8-11 degrees Celsius, the humidity did not change, and a vent in the wall ensured light ventilation. In most cases, the dead were placed in a pine coffin with wood shavings, which absorbed the bodily fluids, allowing the bodies to dry up gradually. Pine wood prevented the proliferation of fungi and bacteria.

Due to this amazing find, museum workers managed to get lots of reliable data about the lifestyle of the people at that time. The mummies include three nuns, 30 priests, the wife and child of the local postmaster, surgeons, the founder of the Vác hospital and first director of the town's school for the deaf.  A surprising fact was that while 70% of the mummies had tuberculosis, many were identified as having recovered from the disease. In seeking an explanation for this fact, the research of tuberculosis accelerated greatly.  In 2010, one of the mummies, Michael Orlovits, born in 1765,  had a CT scan. The scientists hope that studies of mummies will provide a window into the lives of ancient people and civilizations around the world.