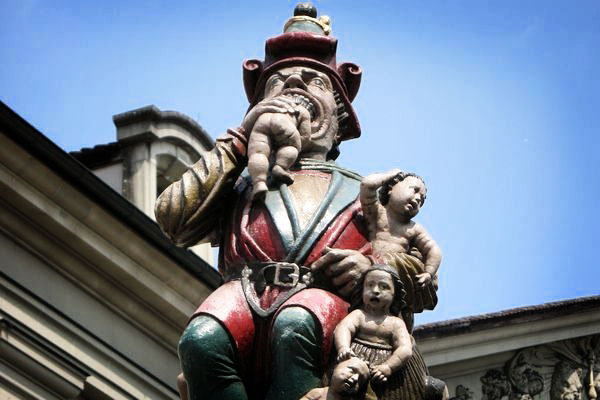 The oldest fountain in the city of Bern - Kindlifresser, or “Child eater” - was erected in 1545-46 by Hans Gieng in place of the former wooden one. Initially the fountain had a simple name - Platzbrunnen ("fountain in the square") - it  received his current name in 1666 .

The sculpture on the fountain depicts the Eater with a child halfway in his mouth, holding a bag full of frightened children slung over his shoulder, presumably left to feast on later. Oddly enough, no one knows what the exactly the sculpture represents, but there are three main theories.

The first and most unfortunate theory is that the Child Eater was built as a kind of a warning to the Jewish community in Bern. The hat that the Child Eater is wearing is strikingly similar to the yellow cap, which the Jews were forced to wear at the time – the Judenhut. It was a cone-shaped pointed hat, white or yellow, worn by Jews in the middle ages – initially by choice, later by force, so that they could be distinguished from others.

The second version is that this is Kronos, the Greek titan. As we know from Greek mythology, Kronos was the first generation Titan, who descended from Uranus and Gaia. His first dirty deed was castrating his father and throwing his testicles into the sea. (The testicles produced white foam, from which, much later, Aphrodite emerged). Kronos knew the prophecy – he will be overthrown by his sons, so he devised a plan that his wife Rhea was to bring each newborn son for him to immediately devour. However, Rhea couldn't take this much longer, and when the sixth son, Zeus, was born, she hid him and later the prophecy was fulfilled.

The latest theory is that the Child Eater is the image of the older brother of Duke of Berchtold, who founded Bern. Duke of Berchtold was so jealous of being overshadowed by his brother, that his jealousy caused him to go completely insane – one day he just collected and ate all the town's children.

These theories might not be true, and there could be a simpler explanation – the sculptor just wanted to show the children of Bern that they should not misbehave, or else they would be eaten. Whatever the Eater sculpture represents, it has been scaring the bejesus out of the little Swiss children for almost 500 years.

Read more about Switzerland off the beaten path