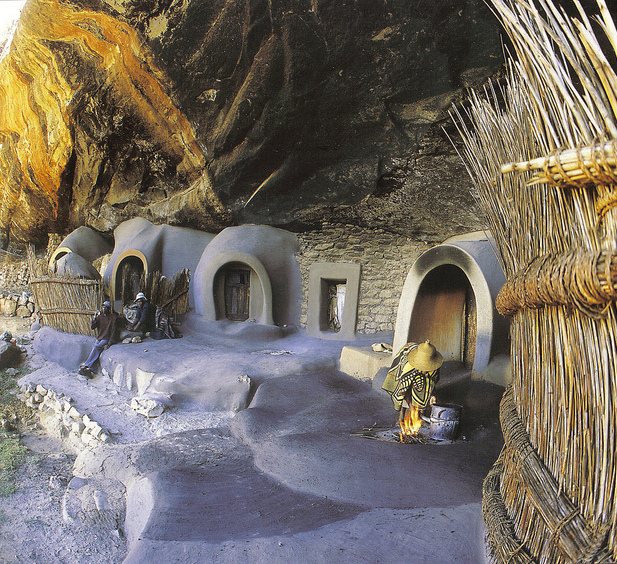 What would you do to escape being eaten by either beasts or cannibals dwelling among rocks and landscape of Africa? That’s right - you would find a safe shelter so that no one could reach you, like first inhabitants of the Kome Caves in Lesotho did. At the beginning of the 19th century infamous wars for food made people use stone caves as a hideout from Basotho people who resorted to cannibalism. Furthermore, the descendants of those original dwellers keep on living in the caves.

Lesotho is a beautiful, poor, but culturally rich land. It is a democratic, independent country with the unique characteristic of being completely surrounded by its neighbor - the Republic of South Africa. This landlocked country is approximately the size of Belgium. It is also known as the Kingdom in the Sky because the country lies 1000m above sea level. Among tourist attractions of Lesotho there are Basotho houses, the Royal Palace in Maseru, mountains, the Afriski resort and, certainly, the Kome Caves.

The Kome Caves in Lesotho belong to a National Heritage Site. Very friendly local inhabitants are always willing to show you their houses made out of mud and cow-dung inside the cave. These “houses” have decorative orange plaster colored bands around the entrance, while the the walls of the dwellings are gray. As these unusual huts are attached to the cave, their back walls are cave rock. The entrances are quite low, so mind your head while trying to get inside. A regular house features a single bed with a lovely bright handmade cover, cupboards and plastic buckets for storing water. Everything looks neat, simple and surprisingly cozy. The eco-friendly materials for the walls - mud and dung - have to be renewed every three months.

Today the Kome Caves people in Lesotho survive by growing maize, beans and keeping sheep and cattle - the eternal source of eco-building material. The government supports the dwellers of the caves financially, for the sake of tourism. However, be ready to donate some money for taking pictures of the local people whose huts you wish to visit.

Ha Kome is situated near Teya-Teyaneng. Parking at the top of the hill allows travelers to walk about 20 minutes to get to the Visitors Centre, where you will be offered a guided tour. Without a guide it is almost impossible to find a way to the village, so it is recommended to hire a guide.

Today the people of the Kome Caves in Lesotho survive by growing maize, beans and keeping sheep and cattle, the eternal source of eco-building material. The government also pays some subsidy to the dwellers of the caves so that their houses might attract tourists. However, be ready to be asked to donate some money for taking pictures of the local people whose huts you wish to visit.

Read more about Lesotho off the beaten path