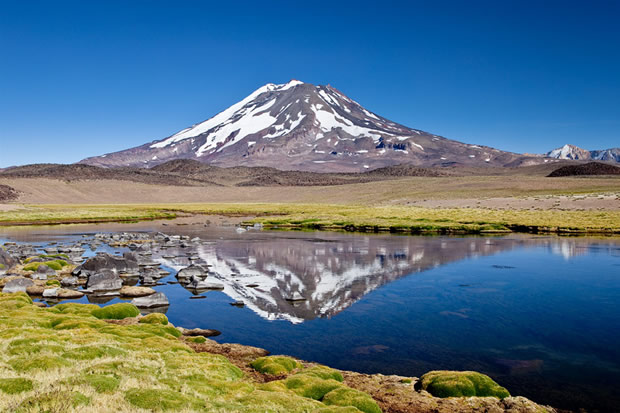 This small lake is surrounded by impressive cliffs, whose peaks reach a height of 3200 meters. This nature reserve, which is located on the border between Argentina and Chile is the pride and also a mystical symbol for both peoples. The scientists have been trying to explain how a lake, situated in the crater of an active volcano does not kill and drive out all the living organisms that inhabit the area – the lake is surrounded by sulphur vents, the lake is five times saltier than the sea water, and the level of arsenic in the water makes it undrinkable. The levels of oxygen are quite low at that altitude, and the UV radiation is much more intense.

Despite all this, flocks of  pink flamingos visit the place every year, and there are various types of fish in the lake. The rocks around the lake are covered with layers of resistant microorganisms, which serve as food to the flamingos. These extreme conditions are similar to those of the early Earth, and studying the microbes that flamingos feast on could reveal new facts about the beginning of life on our plaet.

There is also an unknown mineral present around the lake – a red crystal substance that grows on the rocks, the origin or composition of which are still unidentified.

It is quite amazing to see how life forms can adapt to such a hostile environment. Apparently the flamingos filter the salty water of the lake and retain the nutrients and microorganisms. Flamingos are known to be very adaptable species that can adjust to various environments, however this is the most extreme case which they have managed to adapt to.

Gallery: Life in the deadly waters of Laguna del Diamante

Owakudani - the valley of the black eggs