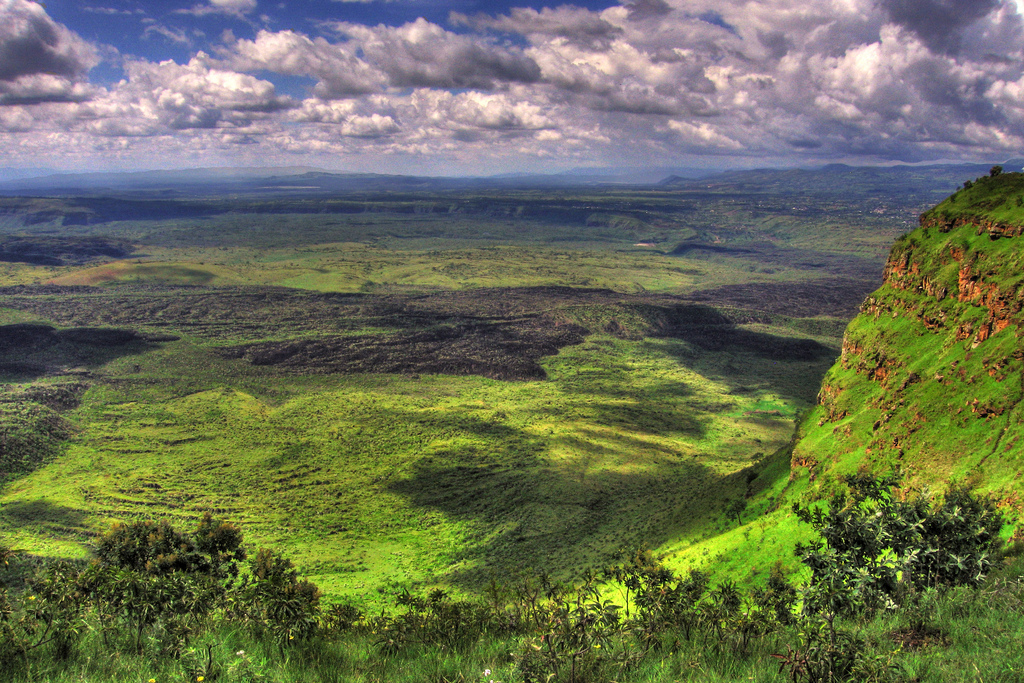 Menengai is the biggest volcanic crater in Kenya and one of the largest in the world. As of now, the volcano is dormant  - its last eruption happened in 1991. Menengai's crater is 12km in diameter and its area is 90 square kilometers. On top of the volcano there is a pole with signs pointing to different cities of the world. Besides the exotic landscape, scenic sites of Lake Nakuru and Lake Bogoria, hot springs, geysers and excellent hiking trails in the area, there are many interesting local stories about Menengai.

First of all, what's in the name Menengai? In Maasai language, this word means “a place for dead bodies”. Maasai are semi-nomadic people, known for their distinctive customs and jumping dance.  In the 19th century, the Maasai split up into many tribes, waging war against each other for cattle and pastures. One of the massacres occurred just outside the crater, and many warriors' bodies  were dumped into the crater.

The name Menengai also translates as “pandemonium”, and is connected to the legends of mystical creatures living in the crater. Locals claim that many a time they could hear weird sounds, reminiscent of cowbells, coming from the depths of the crater, which led them to believe that something lives in there, and that it can not be good, since it spews fire. Many locals still believe that the evil spirits continue dwelling in the crater . Excited by the strange stories about the place, young men like to go hunting in those dangerous areas to prove their bravery, and some of them never return. Because of this, there are stories about people losing their way and disappearing near the volcano, and then being found many days later, not knowing how much time they were gone and how they got lost.

One of the recent incidents tells about a 12 year old son of Magdalena Vaitera, who got lost around Menengai. Day and night, Magdalena searched for her son, calling out his name to no avail. At some point she thought that she heard his voice, slipped,  fell from the rocky edge, and died. The boy was found two days later by the police, playing in the crater with his buddies, without any notion that his mother was looking for him. He said he had no idea how much time passed by and that he had beautiful visions inside the crater.

Some people make pilgrimage to Menengai, prior to which they fast and pray vigorously, and then stay in the cave south of the crater for months. Strangely, Catholic priests are known to choose this place for ending their lives – two priests jumped into the crater, and in 2005 another priest drove his car directly into Menengai's depths. Others say that the volcano is not evil at all, and that it is a great place to get rid of your negative energies.

Other interesting stories tell about demons who plant corn and wheat inside the crater, and then gather it within an hour, and about an evil flying umbrella, which appears every time before the rain. No one knows where the umbrella comes from and where it disappears to, but when it rains, it covers the entire crater to not let the water in. Some locals claim to have seen the devil riding a motorcycle on a hill called “Kirima Kia Ngoma”.

Gallery: Menengai crater - the dwelling of a demonic flying umbrella