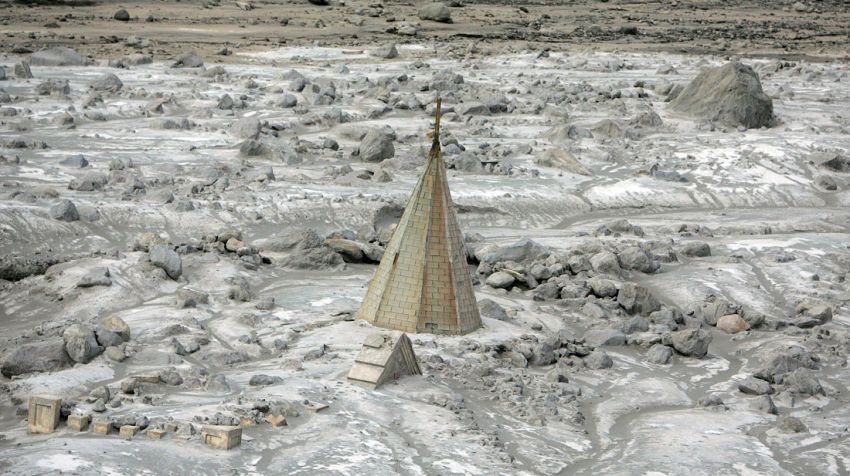 The island of Montserrat is located in the Caribbean Sea. This paradise was destroyed in July 1995 as a result of the eruption of Soufriere Hills volcano. The volcano has not spared neither the capital of the island nor about 20  other villages. Now Montserrat is a restricted zone of ghost towns and villages.

Since 1995, the volcano erupts intermittently, taking its sweet time to gradually destroy the entire place. The capital, Plymouth, the island's only port and the airport was destroyed by the first eruption.The island has a Volcano Observatory (MVO), which continuously measures the activity of the volcano, and a complex system of civil defense. The island is divided into zones, labeled by letters (A, B, ...) with different danger levels. Depending on the level of danger, some activities may be allowed or forbidden in different zones – in some, it is possible to live and do whatever you want, not minding ashes falling from the sky or Caribbean cyclones, somewhere else you have to be prepared for evacuation, and there are zones where no one can enter except for the specialists. Every remaining inhabited house has a special radio for evacuation alerts.

Montserrat is definitely a place for the ghost town explorers. Here, marauders did not have time to plunder the houses, which were abandoned 20 years ago. You can still see expensive clothes on the hangers, food in refrigerators, utensils and newspapers dated June 1995 on the tables – quite a creepy spectacle. Some houses have almost been consumed by the bush, and some parts of the island are almost completely buried under the volcanic ash.

Nowadays, the island lives off tourists. People come here to watch birds and walk through the mountains. Generally, if you're interested in seclusion, Montserrat is probably the place to go to. There are no clubs, no restaurants, no luxury hotels, and practically no people – just all sorts of animals, mountain trails and beautiful forests. There is no capital anymore, the temporary administrative center is the Brades village in the north of the island.

Read more about Montserrat off the beaten path

Find more off the beaten path near: Saint Peter's