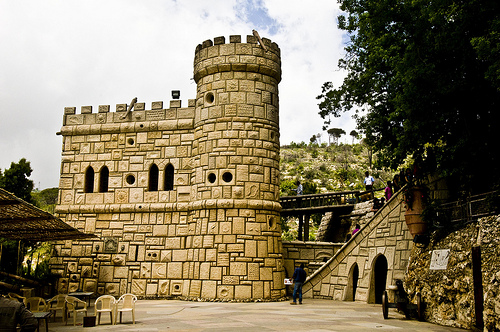 Not far from Beit ed-Dine there is a medieval-looking castle, which at first glance seems like a renovated Crusaders ' structure, but it has nothing to do with Crusaders or Middle Ages. The history of this castle is very unusual – it is a story of one man's courage, faith, patience and hard work to turn a dream into reality.

The story started over 68 years ago in a small settlement near the fortress Al Hosn, Harat al-Saray, on July 27, 1931, when Moussa Abdel Karim al-Maamari was born. Since his early childhood, the boy had a dream to build a castle with his own hands, but after his classmates heard about his dream, they made fun of him. One day during a class, when 14 year old Moussa drew his castle, his teacher made fun of him and ripped his drawing into pieces, and his girlfriend Saydeh laughed as well.

When Moussa got older, he left his home, and went to Saydah to work at a medieval fortress restoration site. In 1947-51 he worked for the National Museum of Beirut on the restoration of objects excavated by Lebanese archaeologists. Because of his hard work, experience and talent, he was later assigned to work on the restoration of the palace of the Emir of Lebanon, Bashir Shehab II in Beit ed-Dine.

It was then, when Moussa made his first step towards the realization of his dreams. He bought a plot of land, received a building permit and started preparatory work for building his castle. First foundation stone of his castle was laid in 1962. Moussa spent more than half  of a century hand-building his dream castle.  In his book, "The dream of my life," Moussa said that the work took 21,900 days and 394,200 hours.

Another dream of Moussa was to invite his teacher and his ex-girlfriend to the castle's opening. He deliberately made the main doorway very low, so that those who mocked and offended him had to take a bow while they enter the castle. Moussa's teacher was not alive anymore, but Saydeh, who visited the castle, realized her mistake.

The castle has a museum inside, which displays an impressive collection of weapons and artifacts showing life of the Lebanese in the past. The castle looks like a true medieval building with a moat, drawbridge, and medieval-style ramparts. Besides Moussa's gun collection, daggers, swords and Bedouin jewelry and wax figures depicting scenes from the past, there is a room showing a teacher beating a student – Moussa's memory from his childhood.

Gallery: Moussa Castle - a dream built over a lifetime