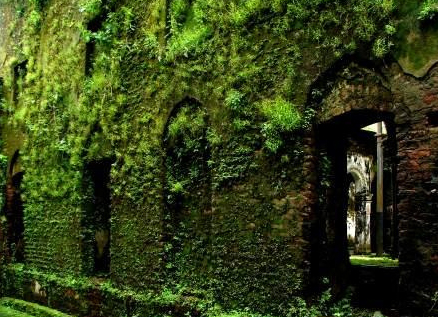 Muktagacha Rajbari is a crumbling palace in Bangladesh. It is one of the oldest Zamindar palacial complexes, situated at Muktagacha thana in Mymensingh district.  The complex occupies at least 20 hectars of land, with five or six temples, including a temple to Shiva,  3 intact Shiva Lingams in black marble and of different sizes, some ponds and outhouses. The structures that used to keep mummified skulls of elephants and  the bodies of two royal bengal tigers are on the verge of extinction.

The Zamindars of Muktagacha constructed many temples with large ponds and gardens for their subjects. With time, however, the memories of Zamindar's establishments are slowly disappearing into oblivion due to the lack of repairs and maintenance. Once being mansions with all kinds of attributes of lavish life, along with herds of elephants, these structures have become almost unrecognizable, being consumed by time and vegetation.

It is hard to believe that sometime in the past Muktagacha Rajbari was actually inhabited  - the place looks more like Disney's Jungle Book scenery – it seems like at any moment a bunch of monkeys will jump out at you and burst into song and dance. Bats can also be seen flying in and out of the palace at night.

Only a part of the area, which is called Char Ana, is now being protected by the Department of Archaeology. The protected area has a big gateway, a garden, some reservoirs and other constructions. You can enter the palacial comlex with the permission of the authorities, but it is advisable to take caution, since the buildings are in a very poor condition.

Read more about Bangladesh off the beaten path